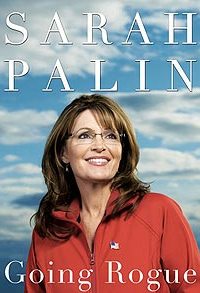 In the new memoir, Palin talks about her anguish associated with her teen daughter’s pregnancy making national headlines. The interesting thing is her book does
not reference the baby papa, Playgirl model Levi Johnston — whose layout debuts the same day as Palin’s book!

Palin also talks about having to wear fancy clothes that she couldn’t afford when she preferred less expensive clothing. The 413-page
book has 68 color photos and also dishes against people who ran Senator John McCain’s presidential campaign.

The behind-the-scenes look indicates there was a significant amount of tension between Sarah Palin’s advisors and McCains. In fact, she was prevented from giving a concession speech on
election night and was “bottled up” from reporters during the campaign itself. In a word, she wasn’t able to be herself, or so she says. Plus, during the debate with Joe Biden she
was told to give non-answers.

Going Rogue is anticipated to fly off the shelves since the first printing of 1.5 million copies has been near the top of the best-seller lists for weeks even on pre-sale! HarperCollins is
publishing the tome which was pushed up from production from this spring to this Tuesday. Palin received an advance of at least $1.25 million to write the book which alluded to the famous Katie
Couric interview.

The former governor says Couric was condescending, biased and “badgering.” Palin also accuses the CBS anchor of leaving substantial comments on the cutting room floor. Furthermore, she
says she was shocked when asked which newspapers and magazines she read and wonders in hindsight whether or not she should have asked Couric what she reads as well.

SheKnows Chick Lit gets married: the best of bridal fiction