Leigh Anne Tuohy shares her story with SheKnows in a deeply personal interview that gets to the heart behind the heart-filled Sandra Bullock instant classic, The Blind Side.

Tuohy famously took in a homeless teenager in Memphis, Tennessee who would find his calling and become a football superstar. What led this wife of an entrepreneur who owned over 80 fast food restaurants to spearhead an effort to make Michael Oher a home that could not have been further from where he grew up? 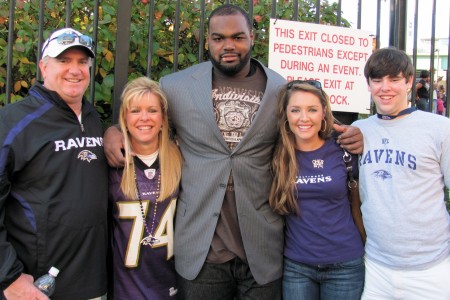 How that path was paved is not completely told on screen in The Blind Side directed by John Lee Hancock (The Rookie). Tuohy sat with SheKnows at the Four Seasons Hotel in Beverly Hills after a long day of interviews with the film’s cast. Stay tuned for our exclusive video interviews with stars Sandra Bullock and Tim McGraw!

After sitting amongst the hugest stars in the film and music business, the playing field leveler was Leigh Anne Tuohy. Equal parts firecracker, strong Southern woman, inspiration, motherly to all (including yours truly!), pragmatic and one-hundred percent what made what The Guess Who so perfectly called the iconic American Woman.

Leigh Anne, husband Sean and their two children, Sean Jr (SJ) and Collins, did not simply adopt Michael Oher, the engulfed him in familial love that has changed lives exponentially. With The Blind Side’s arrival on November 20 in theaters everywhere, look for the inspiration to explode.

SheKnows: Hello Leigh Anne, it is such a pleasure to sit with you after witnessing your stirring story. I think the film is a strong statement for women. How do you think your story speaks to women?

Leigh Anne Tuohy: Southern women are strong natured anyway. It’s kind of a characteristic. Maybe, a characteristic flaw (laughs). I’m very strong willed. I think at this point in our society and in our country right now, everybody’s got to be strong willed. I think women have to wear a lot of different hats. Not only do you have to be the mother the nuturerer, but also the wife and the housekeeper and now, so many have to and want to have a career. So, you have to wear a lot of hats. I’m not a big women’s liberation person — not at all — but I do think right now, women have to contribute to all facets.

SheKnows: I wondered what you thought of hearing Sandra Bullock was going to play you?

Leigh Anne Tuohy: I was thrilled. There were names and names and names that were thrown out over a year-and-a-half. It’s all about timing. It was a rollercoaster. Finally, they said it was going to be Sandra Bullock. I thought, “yeah, I’m sure it’s going to be somebody else.” Three weeks later they called and said she signed on. I was pleasantly surprised. I fell in love with her. She did a great job.

SheKnows: For some, Virginia isn’t quite “the South,” any issues with a Washington, DC suburb of Arlington, Virginia-native tackling Tennessee? 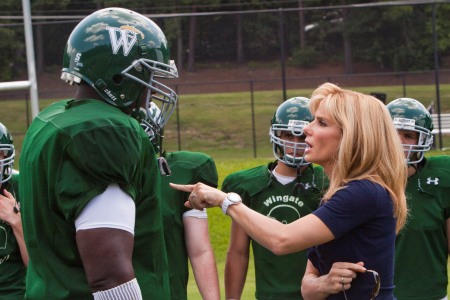 SheKnows: I’m sure Sandra does too. You had kindred spirits heading in to telling this story. One theme that arose for me from The Blind Side is how you did not really change Michael’s life, he changed yours. How can you quantify in a way that your life would be different without him in it?

A family finds itself

Leigh Anne Tuohy: If Michael had not come into our lives it would have been extremely different. With all that being said, we have a different view of life now. We view everybody different than we did. We realized that there’s a need out there that we didn’t really know about. We were living in our own little cocoon. You tend to realize that there is a lot going on out there that you’re not aware of and it brought so much to light. Even relationship aspect-wise, it all brought us closer together. We had that common bond. We went through trenches that a lot of other families don’t go through. 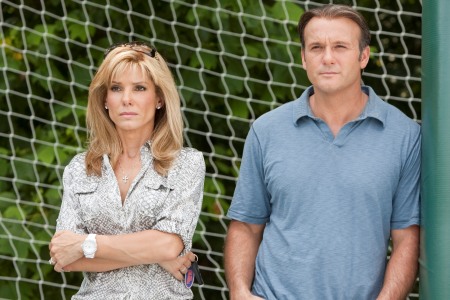 Leigh Anne Tuohy: We came out of this as a stronger family. I’m thankful. I also think that we are so much aware of all people now and feelings and their needs. You don’t know what the guy next to you has going on. He’s got mud on his shoes or a tattoo. We’re so quick to judge. We are so, so quick to judge. You don’t know the worth of that person or what they could contribute to society. We tend to put labels on people. There’s a lot of things that we’ve come through so much, I think, the better.

SheKnows: You’re talking people judging a book by the cover, I know they show in the film, when you first meet Michael where it’s cold and raining and he’s wearing shorts and a T-Shirt in November. What was that moment really like?

Leigh Anne Tuohy: John Lee (Hancock, director) took some liberties with that, but the scene really happened. It was the Tuesday or Wednesday before Thanksgiving and the kids had just gotten out of school and we had been over my mom’s dicing nad getting ready to cook for Thanksgiving. We were coming back home and Michael was walking and he had on shorts and it was…it’s almost become an urban legend (laughs). It was a blizzard (laughs). It was chilly, it was like 40 degrees. I just commented that he looked like a fish out of water for an African-American kid to be where he was at that moment in our neighborhood. You just don’t see African-American kids walking around the neighborhood at 9:30 pm at night in shorts. I said, “who is that?” SJ (her son) said, that’s a new guy at our school. I thought, “what he’s doing out here?” SJ told me he plays basketball. But, school was closed. Sean (her husband) wondered if maybe he had gone to shoot some hoops. I said, “turn around the car.”

SheKnows: You were compelled?

Leigh Anne Tuohy: It was obvious after we turned around and chatted a few minutes that he had no mission, no plan. We thought he was going to the gym because it was warm. Sean said that the gym is not open, let us take you home. He wouldn’t let us take him home, but he let us take him to a bus station about six or seven miles away. So, we drove him that night to the bus stop. Then, he went back home. Flash forward a couple weeks and that was the first time he spent the night on our coach. When I pulled over, it was a seed that was planted. I immediately knew after the conversation. I come to find out, none of that was really the truth. It snowballed. I went in on Monday after Thanksgiving and asked about Michael and who was this kid. Why doesn’t he have long pants on in November? Where does he live? Where are his parents? I didn’t get any of the answers I wanted yet. I just took it from there.

SheKnows: In the film, and also in real life, it seems that adopting Michael really happened naturally.

Leigh Anne Tuohy: It did. It really did.

SheKnows: There was a natural Michael coming into the family that felt effortless. When Sandra Bullock and Tim McGraw and the kids are gathered around the table and ask Michael if he’d like to be part of the family, it felt truly as if that moment was incredibly organic.

Leigh Anne Tuohy: It was, there was never an agenda. There was never a moment. That was so authentic. It just happened. People find it so hard to believe. We have crazy lives. My husband has a very successful business and he tries to run 80-plus fast food stores, and yet he broadcast (play by play) for Memphis’ NBA team, I’m trying to get here yesterday, he could less, but he needs five suits out because they’re leaving for a week of road games. He needs his suits. That’s what was important right then. That’s how we operate. Whatever the need is at that moment, we take care of it. You throw in a daughter that is a level-nine gymnast and a state champion pole-vaulter and we drive two days a week to Arkansas because that’s where the Olympic guys are, and then you throw in Michael playing three sports and constantly needing everything to get through those sports and then you have Sean, Jr (laughs) who’s just along for the ride and always helping out. Our lives are always crazy. It was like, to Michael, if you want to jump in this frying pan, let’s go!

SheKnows: Lastly, your husband in the film is portrayed by Tim McGraw. Tell me your girlfriends in Memphis were not so excited for you! 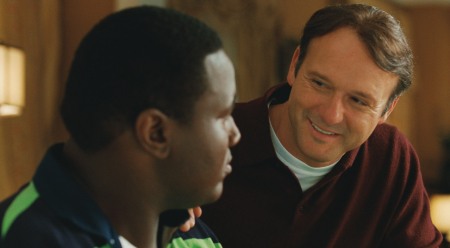 SheKnows: That has to be a blast.

Leigh Anne Tuohy: He did a good job as Sean. He’s cocky and a little arrogant. He’s a smart ass and I think Tim nailed all three of those beautifully. My husband’s personal assistant is a huge Tim McGraw fan, so she was in heaven getting to hang out with him. That was a big feather throughout this whole thing is getting to hang out with Tim McGraw.