Prior to seeing Pirate Radio, knowing the filmmaker behind it is responsible for the world of Love, Actually, Notting Hill, Four Weddings and a Funeral, audiences may be surprised at Richard Curtis’ latest film’s subject matter. As Pirate Radio is a love letter to rock and roll. 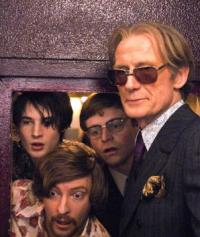 Pirate Radio
arrives in theaters across the US November 13 and is still very much a film about love. The target of Curtis’ affection in Pirate Radio is rock and roll and how it was almost killed
by the BBC.

This is London in 1966, the time of The Rolling Stones, The Beatles, The Who, The Kinks, Eric Clapton and Cream and Jimi Hendrix who went to the UK during this period to establish himself
musically. To think that the BBC, the network responsible for airing programming over UK radio and television, has banned rock and roll from its stations in 2009 is incomprehensible. In 1966,
across the UK, it was the law of the land.

There were 50 million people in the UK in 1966 and on a daily basis; 25 million of them listened to Pirate Radio.

Pirate Radio was the only station available on the dial that played The Beatles, The Stones as well as an army of world favorites including The Beach Boys, The Supremes, Cat Stevens and
The Isley Brothers.

Although not a freedom of speech movie as much as Curtis’ love letter to rock and roll, Pirate Radio is still an honest to goodness opportunity to talk about freedom and its costs.
To anyone raised on iPods and even MTV, Pirate Radio harks to a time when “morally corrupt” music was not available on the internet, television and yes — radio. 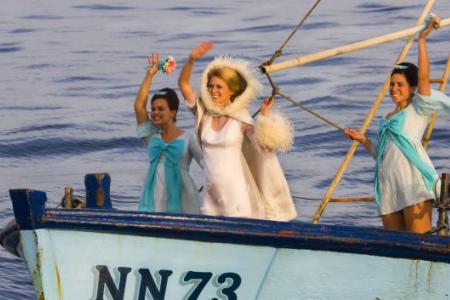 Parents have a priceless opportunity to engage in a conversation with their children all emanating from the screen. On the soundtrack are 32 songs that listeners completely take for granted
currently in a world of music video cell phone ringers. 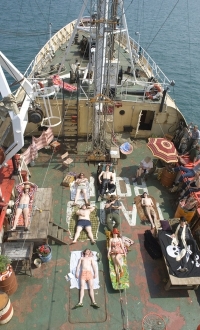 Pirate Radio cannot achieve its message without engaging its audience. With Curtis crafting the words and directing, he proves that even a true story can surprise when even the most astute
believe they know the story.

His cast, as always, is top notch. Rhys Ifans goes places he has never ventured and while Philip Seymour Hoffman may be the lead, the story told from the perspective of the “new on the
boat” Carl. British actor Tom Sturridge is a find for American audiences to take stock as the 18-year-old arriving on the boat ready to rock.

Kenneth Branagh and Emma Thompson reunite in Pirate Radio, although they don’t share scenes. Both play equal roles in the power of the film with each showcasing the changing
landscape of not only the United Kingdom, but the shifting culture of the world in 1966.

Curtis’ told SheKnows that he wrote the role Bill Nighy portrays specifically for the British legend. Nighy’s legacy as a never-to-be-missed performer is only enhanced by his groovy
turn as the man who runs Pirate Radio. Hoffman, as expected, is brilliant.

But, the Oscar-winner delivers a brassy, yet subtle performance that is rooted in the same place as Curtis’ heart when it comes to telling Pirate Radio’s tale — I love Rock
n’ Roll and we love Pirate Radio.

In celebration of Pirate Radio’s US arrival, SheKnows presents…Pirate Radio!

Why we love UK movies