SheKnows: Taylor, you know, there’s practically an international countdown for your 18th birthday.

SheKnows: Have you thought about plans for that day and how you might celebrate?

Taylor Lautner: I haven’t even begun. We are so busy. I’m taking one day at a time. I don’t even know what room in this hotel I’m going to after this. No,
that’s very interesting, and I wasn’t aware of this countdown. It’s a big day, so yeah, as soon as I finish this, maybe I’ll think about that. 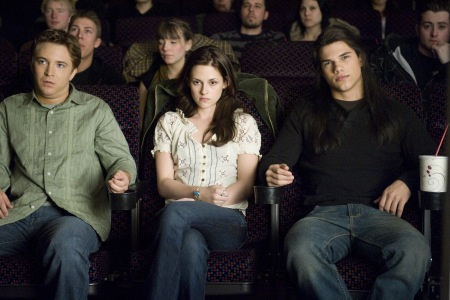 SheKnows: With you being so busy and this being the end of your teenage years, how are you trying to relish it and make sure that this all isn’t a blur in five years?

Taylor Lautner: I’m having the time of my life. It couldn’t be a better end to my teenage years. I’m doing what I love, and I’m spending time with the
people I love. So it’s great. I’m definitely never, ever going to forget this.

SheKnows: You said you spend a lot of time with Robert and Kristen. They’re a bit older than you and were acting when they were your age. Have they given you any advice about
how to enjoy this time of your life?

Taylor Lautner: No, I think most of our talking and stuff has pretty much stayed on a business level. That’s the great thing with our relationship. All of us are completely
open and not afraid. We don’t hold anything back. We talk about our characters together and have meetings to discuss our characters. It’s really, really helpful. We haven’t gotten
into “life” talks yet. 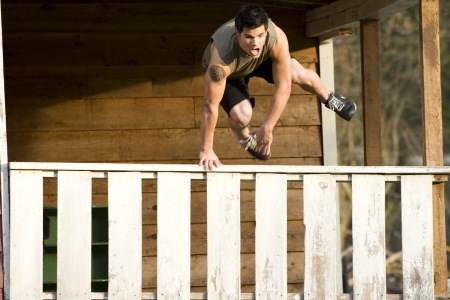 SheKnows: Silly but fun question: When would it help in your real life to turn into a werewolf?

Taylor Lautner: I don’t know. I guess when you’re younger, in school and being picked on by some bullies, get in a fight with your little sister… I don’t
know. That’s a good question. I don’t think that it would be a good situation. It could get very, very ugly!

SheKnows: Rob, who is your favorite vampire of all time?

Robert Pattinson: I don’t really know. I always think of the wrong people. I always think of like Ethan Hawke in Interview With the Vampire, but then he’s not a
vampire. He’s the interviewer. [and it was actually Christian Slater!] I like Gary Oldman in Dracula. There’s actually a bunch. I really Wesley Snipes [in
Blade] is great.

SheKnows: How do you show fans that there is more to you than just “Edward”?

Robert Pattinson: I think you just do it through doing jobs. It’s such a risky thing doing interviews. I try to limit the amount of interviews that I do because no one is that
interesting, especially when you’re not really saying anything. And I don’t particularly want to be a character in society or whatever. So I guess the only thing that you can do is do jobs and see
if people respond. I’m always holding onto the fact that I don’t really know who I am. Hopefully, I won’t compartmentalize myself because of that, because I’m completely ignorant of the whole
thing. I’ve never really struggled with anything up until recently. I’ve got to step being so self-deprecating because people are starting to believe it. So I’ve I tried to stop doing that.

SheKnows: Last year at the Twilight press day, you were teamed up with Edi and Rachelle, and you really showed what good friends you were. What’s it like to say
goodbye to both of them and others you’re close to in the cast? Have you gotten to know Bryce very well?

Taylor Lautner: Yeah, it was definitely sad to see both of them go. All of us, the whole entire cast, love both of them. They are great people. But Bryce is amazing. She’s
extremely talented and a great girl as well. So we’re definitely lucky to be surrounded by an amazing cast. I wouldn’t be able to pick one. If I were to start, I’d end up listing
the whole cast. I do spend a lot of time with Kristen because all my scenes are involved with her. So Kristen and I are very close. I guess I’m close with Rob, too, ’cause we spend a
lot of time together as well. But the great thing about this series is the whole entire cast is so close, and it would be a nightmare if we weren’t. It would be impossible to make this series
because the characters are so tight. So we’re really thankful that we all get along so well.

Robert and Taylor: the next chapter

Robert Pattinson: Depending on how things go, I’m doing a movie called Bel Ami in February, which is an adaptation of this Guy de Maupassant novel. I’m doing, I hope, a
western with Rachel Weiss and Hugh Jackman called Unbound Captives at sometime around there as well. They have to try and model everything around everyone’s schedules and
stuff. 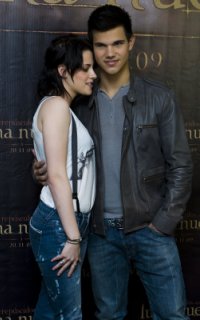 SheKnows: Who do you play in the western?

Robert Pattinson: I’m playing a kid who was kidnapped by the Comanches when he was 4 years old and is brought up by them. Then his mother spends her entire life trying to find me
and my sister. When she finds us, we can’t remember who she is and can’t remember anything about the western culture that she grew up in. I speak Comanche in the whole movie. So you can’t really
get more different from Edward. It’s just a cool script. It reminded me in a lot of ways of Giant, which is one of my favorite movies. I think that’s why I responded to it.

SheKnows: Is James Dean one of your fave actors?

Robert Pattinson: One of them, yeah.

SheKnows: Taylor, you’re filming a movie with Taylor Swift. Has she written a song about you? Do you want her to write one for you?

Taylor Lautner: That’s a scary thing. I don’t know if she has. I have no idea. That movie was a lot of fun, and it comes out pretty soon after New Moon does.
It’s called Valentine’s Day. There are a lot of fantastic actors in it. I got to work with legendary director Garry Marshall, and Taylor was great as well — so I’m excited for
everyone to see that [next year].

SheKnows: So what about you and Taylor Swift?

Taylor Lautner: What about us?

SheKnows: Is it a publicity thing because the film is coming out, or are you really dating?

Taylor Lautner: The very funny thing is that you have seen every single move I make, so I guess I can leave it up to you to decide.

SheKnows: Can you talk a little about the next movie, Eclipse?

Taylor Lautner: Eclipse was my favorite book, so I was really excited to start filming the movie. I just love that it’s the height of the love triangle.
Twilight develops Edward and Bella’s relationship, New Moon develops Jacob and Bella’s, and in Eclipse the three of them are physically together. It has one
of my favorite scenes ever in that movie. The tent scene, where Edward is forced, and I guess it was a choice of his, to let me sleep in the same sleeping bag as Bella just so she doesn’t
die, because she’s shivering to death and I’m warm. I’m the only thing at that moment that can keep her alive. It’s a funny scene. There’s a lot of ribbing going on
between Jacob and Edward. It’s going to be a really good movie and visually stunning. [Director] David Slade is incredible visually. 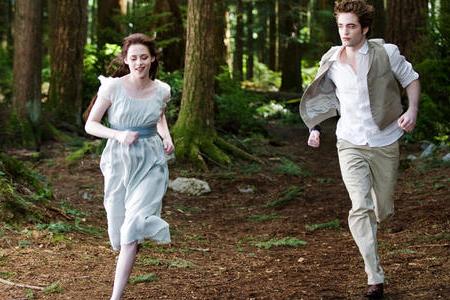 SheKnows: What did you think of your wolf when you got to see it on screen?

Taylor Lautner: I was blown away. I was really excited. Because when I’m filming the famous trailer shot when I’m running through the field and I jump up and fly in
midair, I’m attached to wires. I’m running and I let the wires pull me up in the air and jerk me to a stop. I just have to freeze there and let them convert my body into a CGI wolf, and
the whole time I’m like, “Don’t I look cool!” After I saw the final version last week, after I saw the wolves, it was amazing. And the fight scene right after that between the
Jacob and Paul wolves was so cool. I thought they were extremely powerful and looked very real.