Izzie and Meredith are back for rounds on the November 12 Grey’s Anatomy, while a Malibu hike gets ugly on Private Practice. 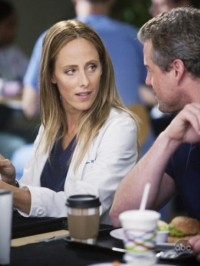 Izzie’s disappearing
act comes to an end as Katherine Heigl returns to Seattle Grace November 12. Considering the way hubby Alex broke down last week
when she didn’t show up for her cancer treatment, things are sure to be uncomfortable now that she’s back… especially if it turns out she’s pregnant, as teased at the end of last week’s
Grey’s Anatomy! SheKnows isn’t counting on that tease to pan out, however, since it seems Izzie did get the treatment,
just at another hospital.

Whatever happens, fans can expect another Izzie exit around the New Year, as mom Katherine Heigl has booked a belated maternity leave.

Intent on ignoring the kiss she shared with Jackson last week, Cristina is not thrilled by the arrival of the cardio god she’s desperately been awaiting. She’s not sure Owen’s Iraqi war vet-pal
Teddy is quite the pro he thinks she is, not to mention whether she should be jealous of their history together.

The Chief continues to struggle with the effects of the merger, and the stress may put him over the edge this week. Word is the sober doc may hit the bottle again.

On Private Practice, Addison and Sam take to the Malibu hiking trails, where Addie complains about her lack of a sex life. Sam
plays the “what if” game, wondering if they would have made it as a couple if she’d accepted his advances back in the day.

Things take a nasty turn, however, when a crash leaves Addison trapped in a car with expectant mom Kara (Ever Carradine). While Addison focuses on her pregnant passenger, Sam goes renegade to deal
with the daddy-to-be’s collapsed lung.

Back at the office, Charlotte, Coop and Violet team up to help a newlywed who goes overboard with his Viagra, while coworkers Pete and Sheldon each hit the bars to forget about their triangle drama
and all that’s unfolded on that front… only to run into each other while trying to pick up the same patron!