Tom Sturridge is Pirate Radio’s main character and much as the Cameron Crowe prototype in Almost Famous, the audience lives the movie through the star’s eyes.

Sturridge sat with SheKnows in London for a chat about coming up in the UK film industry as well as being star-struck by his Pirate Radio co-stars including Bill Nighy, Emma Thompson and
Oscar-winner Philip Seymour Hoffman. 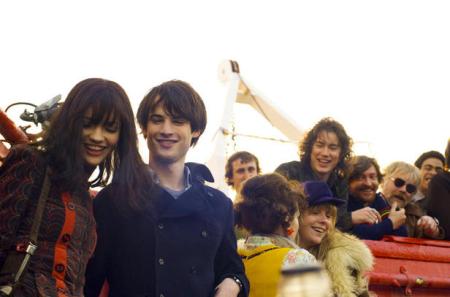 Sturridge’s Carl lands on the ship, dropped off by his mother (Thompson), to find his way in life as an 18-year-old who is lost.

As Nighy’s character says in the film, mom has made a “fantastic mistake.”

Pirate Radio may be the most listened to radio station in all of the UK, but popularity does not necessarily breed finding one’s ambition! Especially on a pirate ship bucking
UK laws by broadcasting banned rock and roll that is led by a rag-tag group of 1960s disc jockeys.

Sturridge sees Carl’s Pirate Radio path mirroring his own as an actor — a young man thrust into a world of legends that he emulates.

Sturridge (Carl) is one of the UK’s rising stars. He’s no stranger to Hollywood with his career-announcing role in Being Julia opposite Annette Bening. Sturridge also starred in SheKnows favorite Mira Nair’s Vanity
Fair with Reese Witherspoon.

Why we adore UK movies