It was all about the country last night on ABC, and as we’re getting used to reporting, Taylor Swift rocked the big night. 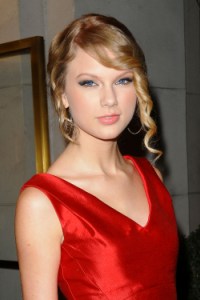 Swift, 19, continued her
reign by taking home four awards last night, including Best Album, Female Vocalist of the Year, Music Video of the Year and Entertainer of the Year.

She had it in her to “thank every single person in this room tonight for not running up on the stage during this speech” after winning Female Vocalist, but the big win left her plain teary.

“Everything I ever wanted has just happened to me,” she gushed, before calling up her band to share the honor on Entertainer of the Year.

Sugarland tried to make their own invite to the stage when they won Best Vocal Duo, hoping to honor the separated Brooks and Dunn, but they declined the offer. An odd moment, for sure.

Mac McAnally took the stage for the other biggee of the night, Musician of the Year, and Lady Antebellum also faired well, taking home Vocal Group of the Year and Single of the Year. As if the
honor of beating out Brad Paisley, Jamey Johnson, Billy Currington and Zac Brown Band wasn’t enough, they got one of their awards from country boy at heart, Kid Rock.

Darius Rucker isn’t new to the stage, as the former frontman for Hootie and the Blowfish, but with his breakout in country, he was tapped New Artist of the Year. Song of the Year also went a little
less mainstream, with Jamey Johnson winning for In Color.

Co-Host Brad Paisley nabbed Male Vocalist of the Year and shared Musical Event of the Year with Keith Urban for Start a Band, but he also earned massive applause for his performance of
Welcome to the Future.

He and his partner in crime Carrie Underwood
also earned best giggle of the night with their rendition of, Mama, Don’t Let Your Babies Grow Up to Be Kanye.

Underwood didn’t take home any official awards, but country’s number one seller of the moment stole the night with a super sexy performance of her hit Cowboy Casanova.

That’s an impressive statement, considering what a tasty night of country this was. Yeeha indeed!

Entertainer of the Year: Taylor Swift

Single of the Year: Lady Antebellum, I Run to You

Song of the Year: Jamey Johnson, In Color

Vocal Duo of the Year: Sugarland

Musical Event of the Year: Brad Paisley and Keith Urban

Musician of the Year: Mac McAnally

The full list of performers for the American Music Awards

19 mins ago
by Hanna McNeila