Robert Pattinson, Kristen Stewart, Taylor Lautner and Chris Weitz landed in Paris to promote The Twilight Saga: New Moon and found what it must have been like to be in The Beatles.

The Paris press conference for New Moon had all the trappings of a similar Hollywood affair, but this is Paris, France where Twilight takes on a whole new meaning of madness.
Check out our video below from France’s welcoming of New Moon! 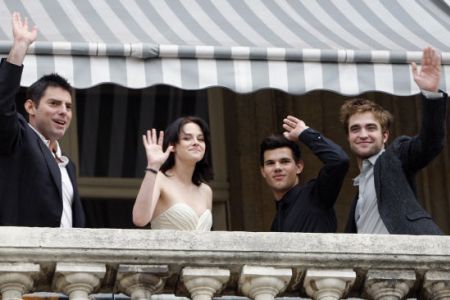 Stewart, who spoke with SheKnows about New Moon, entered the press conference with Pattinson and Lautner on each
side. As the central facet of the New Moon story, the Team Jacob versus Team Edward scream from the fans test of titan power was in full effect.

New Moon debuts November 20 and the hype for the most anticipated film of the year has only begun its frenzy. SheKnows sat at the Twilight Saga: New Moon junket in Beverly
Hills and could immediately sense things were a little different than the last time we interviewed this attractive cast.

It was barely a year ago and no one knew who Robert Pattinson was and Taylor Lautner was most known for being in Robert Rodriguez’s Shark Boy and Lava Girl.

Hints of the New Moon mania being ever so slightly over the Twilight film’s levels were apparent at the 2009 Comic Con in
San Diego. The lines to get into the theater to hear the cast were the longest in the convention’s history. That’s saying something for the home of Spiderman, Batman, Superman and their
kind.

Stay with SheKnows all week as we roll out New Moon coverage as no other in Hollywood. Tomorrow, we premiere the first part of our three-part interview with the guys of New Moon —
Pattinson and Lautner. It’s a real Edward versus Jacob question-and-answer battle of wits.

Read on for more New Moon

New Moon: Behind the scenes

Scene from New Moon: I Would Never Hurt You