Fergie says she’s the one that wants to cheat — with a woman! 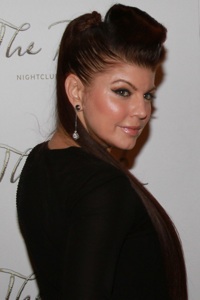 The Black Eyed Peas singer deftly attempted to sway public attention
away from rumors of hubby Josh Duhamel cheating on her with a low-rent stripper from Georgia by chatting about how much she loves chicks.

She loves them so much, in fact, that she claims she had to resort to therapy to figure out that cheating with a woman is still cheating (a session her husband apparently did not attend).

Fergie told The Advocate, “I’ve been very honest with him from the get-go. I think women are beautiful, I’ve had a lot of fun with women, and I’m not ashamed of it. The problem is that I
also love a well-endowed man. But just because I enjoy women doesn’t mean I’m allowed to have affairs in my relationship.”

“I learned through talking with my therapist that it is still cheating even if it’s with girls, so there is a rule there.”

Fergie also says we can count out any threesomes or sex tapes. “No, that’s not happening. We’re too smart for that. We’ve done some filming but with no tape in the camera.”

Glamour Woman of the Year Awards: SheKnows is there!