Tiffani Thiessen, star of White Collar and alum of Beverly Hills 90210, is pregnant with her first child. 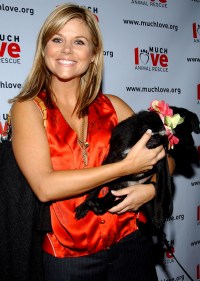 Thiessen and her husband,
artist-actor Brady Smith, have announced they’re expecting their baby in May. In a statement the couple said, “We are over the moon! It’s something we’ve wanted for a long time and we
are thrilled that it’s actually happening.”

Thiessen is currently starring in USA’s drama White Collar and sounds excited that she’ll add the role of mother to her list of credentials including Saved By the
Bell and 90210. She told People this past May when dishing about motherhood, “I’ve never done it — it’s going to be a whole new thing.”

The 35-year-old star and her hubby, Brady Smith have been married since May 2005. Her personal life has been out of the spotlight of late, but you may recall Thiessen’s very public romance
with Brian Austin-Green when they starred on 90210.

A few years later she met actor Richard Ruccolo on the hit sitcom Two Guys, a Girl and a Pizza Place and they later became engaged. Tiffani then starred in the Fox action-drama series
Fastlane with Jennie’s husband, Twilight star Peter Facinelli. After Shannen Doherty left the hit show Charmed, Tiffani was asked to replace her but turned down the role. A few years later in 2003 she broke off her engagement with Ruccolo and then married
Brady in 2005.

Live from the Glamour Women of the Year Awards

Heath Ledger and Lindsay Lohan were dating when he died