All that glitters in Carnegie Hall is indeed gold and November 9, 2009 was no exception as Rihanna was honored in New York City as Glamour’s Woman of the Year. SheKnows was there to get the scoop from the audience perspective. 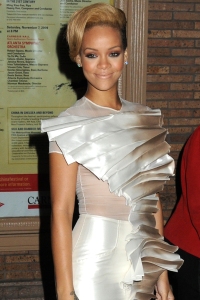 The
Glamour Women of the Year Awards does just that: it honors women in several categories such as entertainment, philanthropy, design, sports and more.

There were countless highlights, one does not know where to begin!

We’ll start with the obvious: there was a bit of controversy surrounding the Rihanna nomination for this award. As the superstar took
the stage one could easily forget her mammoth success is occurring at the ripe old age of twenty-one.

Rihanna read a speech that appeared written on notebook paper!

She indicated, “I love being part of a night celebrating such strong women.” Her speech did not allude to being a victim of domestic violence; however the video montage celebrating her
success showed an increase in women feeling comfortable calling specific hotlines as a result of Rihanna bringing a voice to this topic.

Angelou won her award and gave a stirring speech as she honored “myself first and to anyone else who has the sense to see me.” 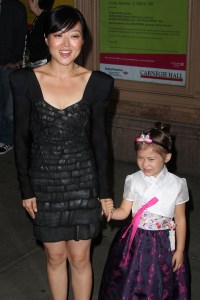 Amy Poehler was introduced by SNL bigwig Lorne
Michaels and gave a shout out to the schoolgirls in the balcony. “Girls, if boys say something that’s not funny, you don’t have to laugh.”

Maria Shriver closed the evening with her speech indicating the importance of giving back and the tremendous joy you get from serving others. Jane Aronson was honored for her creation of Worldwide
Orphans Foundation and was introduced by Katie Couric.

Journalists Euna Lee and Laura Ling were on stage for their award as Catherine Zeta-Jones applauded and introduced them. Marissa Mayer, a visionary at Google was introduced by Matt Lauer.

Not to be overlooked, Susan Rice, Stella McCartney and Serena Williams were also praised and honored as Women of the Year.

In New York City, there are countless ways to get the chills. By hearing this year’s luminaries and their strength, courage, convictions and confidence, the Glamour Women of the Year
Awards did not disappoint.

Read on for more on Rihanna

Rihanna speaks out on domestic violence