Jesse James, is telling his ex-wife to leave his current wife, Sandra Bullock out of their custody dispute. 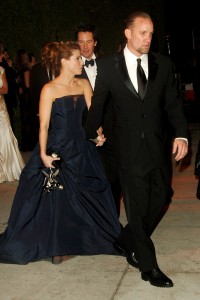 In response to the statements made on television, Jesse James’ attorney called her comments inaccurate and unfortunate. In a statement to People, his attorney remarked,
“Sandra Bullock is not a party to this litigation. Mr James’s sole concern is for the safety,
welfare and best interests of his daughter. The proper forum to resolve this case is in the courtroom.”

James has a five-year-old daughter named Sunny and Sandra has been helping her husband raise her.

Here’s why: Lindemulder was imprisoned in January for tax evasion. Both Bullock and James submitted letters to the court to question her fitness as a parent and concerns about
Sunny’s safety due to Lindemulder’s alleged drug problem.

In addition to her currently busy off-screen life, Sandra has had quite a busy and successful 2009.

You may recall her movie, The Proposal opened in the number one box office spot during its opening weekend. Most recently, she starred in All About Steve with Bradley Cooper. She
currently has approximately five films in development, so no doubt 2010 will be another successful, star-shining year for Bullock!

Don’t miss our exclusive one-on-one video interview with Sandra for The Blind Side November 18.

SheKnows attends the Glamour Women of the Year Awards