Meg Ryan plays Louise in Serious Moonlight, a successful New York City attorney. Louise is touched when she arrives at the family’s getaway house in upstate New York and it is completely decorated in rose petals.

SheKnows is proud to present an exclusive clip from the Meg Ryan film.

Timothy Hutton plays opposite Ryan as her husband of 13 years, Ian, who is not expecting his wife — those rose petals are for his
much-younger girlfriend. When Louise arrives and soon after the rose petal warm had waned, she discovers Ian writing a letter to her informing her that he is leaving for good. 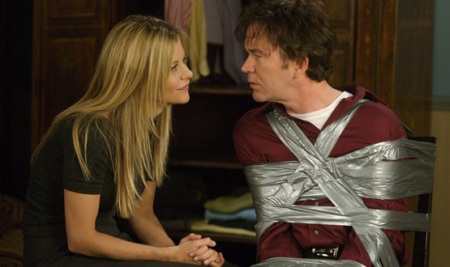 Ryan as Louise takes things into her own hands and kidnaps Ian until he is ready to seriously talk about saving their marriage. Things only become more complicated when Kristen Bell as Ian’s girlfriend, shows up wondering what has happened to her man. Drew Barrymore’s guy, Justin Long,
plays a gardener who happens upon the situation and decides to make some money off of the spousal cheating turned kidnapping.

Serious Moonlight is directed by Cheryl Hines of Curb Your Enthusiasm fame from a screenplay written by Adrienne Shelly.

Shelly is the wordsmith behind Waitress, the film that Hines also starred in and made Keri Russell a movie star. The screenwriter was tragically killed in her New York apartment and never
even saw Waitress hit the big screen.