The action kicks off tonight under the hot sun of CSI: Miami. Horatio (David Caruso) calls in Langston when his
team finds a severed leg in the everglades and determines it came from a Las Vegas missing person, Samantha Matthews. 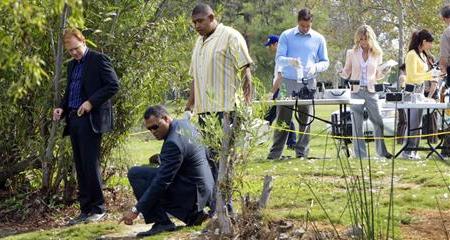 Some questions get answered, but new ones are raised, leading Langston to CSI: NY on Wednesday. With a hostage to locate, the professor turned CSI hits the gritty streets of
Manhattan with Det Taylor (Gary Sinise) to investigate leads on a the trafficking of humans and black market organs.

Then on Thursday night, Langston returns to his regular stomping grounds, the original CSI: Crime Scene Investigation, when the case points him to a prostitution ring in Vegas.

Dubbed the “triple crown,” the three part arc is a move to solidify Fishburne as one of the CSI showleaders. He came in last year, after William Petersen’s exit, and the powers that be are hoping he’ll gain new audience for all three shows this week. 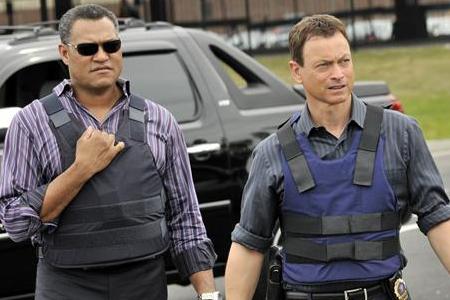 Thanks for the preview, CBS!