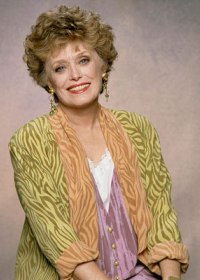 The Golden
Girl’s surgery went “very, very well. She’s going to be great and entertaining us all very shortly,” according to a close friend.

Although the 75-year-old missed a tribute to her at the Castro Theatre in San Francisco, McClanahan knew it was for a good reason. “My doctor has laid down the law,” she said.
“And I’m currently in the hospital having some maintenance on the old ticker. Trust me, I’d much rather be in San Francisco having fun and being adored by all of you.”

When Rue underwent tests prior to a knee operation her heart problem was discovered.

Her recuperation has derailed a performance of a comedy Sordid Lives: The Series at the New York club Comix at the end of the month. It will be rescheduled to a time when she is able to
get back on stage.

Although she’s known for her character of Blanche, it’s hard to believe the Golden Girls was taken off NBC back in 1992 (and who can forget the memorable theme song?
“Thank you for being a friend, traveled around the world and back again…”).

The former New York stage actress from the 1950s co-starred with Bea Arthur, Betty White and Estelle Getty in the sitcom about four older women living together in Miami. Best wishes for a speedy recovery,
Rue!

Rihanna named Glamour Magazine’s Woman of the Year: some are not happy

Roman Polanski gets his day in court