Kristen Stewart clues us in on the New Moon love triangle between Edward (Rob Pattinson) and the buff Jacob (Taylor Lautner) for the affection of the conflicted and heartbroken Bella Swan (Stewart). 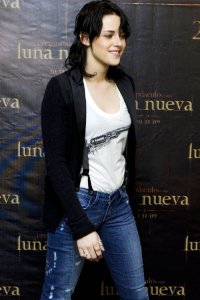 If you are a “Twilight Mom,” a young reader or just curious, we’re sure that you’ve been aware of the huge Twilight phenomenon in both literature and now on screen. With
rumors about love trysts among the young cast and the second installment of the saga New Moon, on our celestial radar, we had to
get the story from Bella herself! So, SheKnows sat down in Beverly Hills with Kristen Stewart.

To catch you up, let’s go for a brief recap. In New Moon, both Edward and Jacob are in love with Bella and both will do almost anything to protect her from their dangerous lifestyles as
vampire and werewolf. Bella, being a normal, red-blooded girl, is attracted to both although her true, bonded love will always be Edward (sorry Team Jacob!).

Edward is so afraid of hurting Bella that he almost kills her by leaving her! Jacob fills the horrible void in her life with friendship and, he hopes, more. Bella becomes an adrenalin junkie when
she discovers that doing dangerous things brings Edward’s warning voice to her side and, in the film version, she sees smoky visions of him as well.

Vicious, vindictive Victoria is on the prowl to kill Bella and when Edward mistakenly thinks Bella has died, he wants to sacrifice his own immortality by letting the top gurus on the vampire
pyramid, the Volturi, kill him. It’s Bella and Alice to the rescue!

Picture the petite and independent Stewart sporting her short, spiky, very dark Joan Jett “do”, black tennies, black skinny jeans and a dressy, black suit jacket with satin lapels over a dark gray
tee with a fir tree stencil on it from Vancouver. Stewart’s make-up was the total opposite of the much less bold, understated look from 2008’s Twilight interview. The young actress looked sexy and hot in dark, smoky eye make-up and seriously blood-red lips!

SheKnows talked everything from Taylor to Rob — to her biggest acting challenges in New Moon when Bella has a melt-down.

SheKnows: Taylor Lautner is emerging from this movie as a huge star and obviously the books ordain how the movie will
unfold, but if you could wipe the slate clean and make a decision, do you really think that she wouldn’t have gone with fine, ole Jacob? 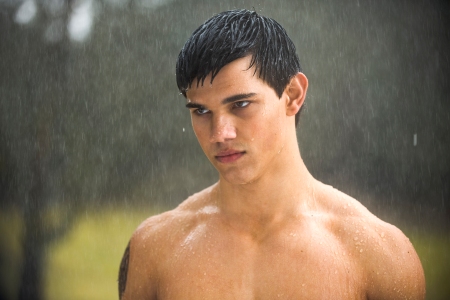 Kristen Stewart: I know, trust me. I’m feeling you completely. I think that that controversy has probably been made bigger than it was. We needed to be sure that whoever played
Jacob was going to be Jacob in New Moon. He’s such a different person. He becomes a man. It’s not just a physical transformation. He becomes an adult. I always knew that Taylor could do that. We
just needed to make sure because it was so important. So, once he actually proved himself, which wasn’t hard to do, even seeing him walk around on set was a different experience. He’s literally
become a different person. He’s just grown up. He’s so confident and the nicest guy I’ve ever met. And, I know I’m using this grammatically incorrect but he’s the funnest guy I’ve hung out with.
He’s great. I’m so proud of him.

SheKnows: This has been so intense for you with one film after the other. Can you talk about that?

Kristen Stewart: There’s already a lot of stuff where I’ve got to say ‘okay, Kristen be here. Experience this. Make sure this isn’t another fleeting situation that you’re going to
barely remember’. You have to force yourself to be present. But, I feel like the fact that I have to opportunity to pick and choose moments that I want to remember and focus on remembering cool
moments. That only tells you that I have an influx of them. I’ve had the coolest two years. I’m so lucky.

SheKnows: A year ago when we talked to you, you were such a shy, sensitive young actor. What has this last year been like for you in terms of a non-stop publicity barrage, all this
stuff about Rob?

Kristen Stewart: I think I’ve gotten a lot more comfortable with talking about myself and knowing that what you say, people are really going to take into consideration and that
always intimidated me so much. I couldn’t finish a sentence because I was so concerned about how it was going to sound and I didn’t want to come across insincere about something that I really love
to do. So, I realized that instead or refraining from saying things, I should have said “I put my heart and soul into this thing and I love it” instead of the really logical, over-analytical reason
why I love it. I’ve gotten more comfortable with it. The whole rumor/tabloid stuff, it’s so false and mean. Even before I became a part of it, and was sort of a star, it’s like a ridiculous show.

Kristen Stewart: Exactly, with false realism. Like a soap opera that seems real but you’re not quite sure. It doesn’t bother me. I don’t take it personally so luckily, because I’ve
had so much experience, it’s gotten easier to talk about the work. 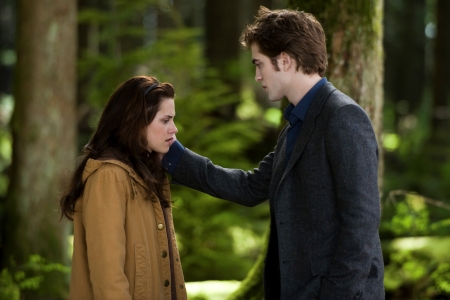 SheKnows: What about the work on New Moon?

Kristen Stewart: I had a really good time on this movie. It was really intense just because of the nature of the story. It goes in a completely different direction. We undermine
the first. We establish a very idealistic idea of love and basically we tell our main protagonist that she was wrong. Where is our story going to be left if Edward’s not there? What I really love
about New Moon is you really see this girl build herself back up and by the time she makes this rash decision to spend eternity with a vampire, she’s in a position that you actually
believe it. You are old enough, you are mature enough to know. You’ve lived life. she grows up.

SheKnows: Did you actually get to ride the motorcycle and, if so, were you into it?

Kristen Stewart: I’m definitely never gonna be a biker. The idea of riding…I’m scared of cars so the idea of riding a motorcycle is never going to be something that I’m into. I
was towed ridiculously. I was on the back of this truck and I probably looked funny doing it. Taylor rode motorcycles really well. There is this one part that’s undeniably him. He rides up and
skids. I left that to him. I wasn’t about to do that. I don’t think they would let me necessarily. They have more faith in Taylor to do that?

SheKnows: Would you ride on the back with a guy though?

Kristen Stewart: Yeah. I did that and I didn’t like it. It’s so precarious. It literally feels like you’re gonna fly off of it! I’m not into that.

Up next…Kristen dishes the most gratifying aspect of the Twilight phenomenon.