Paul McCartney went to New York City and produced a live album for the ages. Good Evening New York City lands in stores November 17 and SheKnows has the first video and single from the rock icon for our readers now!

McCartney and The Beatles performed a historic show at Shea Stadium
over four decades ago and the rock legend felt moved by his return to New York’s hallowed ground, so he brought along a camera crew and wound up producing his next album. 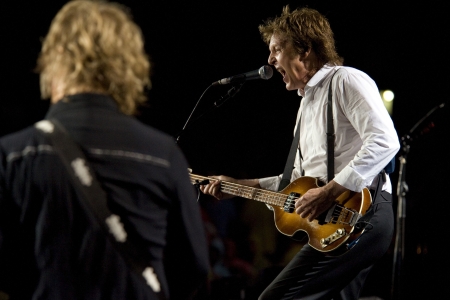 “It was three great nights for the band and for me personally it was very exciting to be back opening a new stadium on the site of the old Shea Stadium where we had played 44 years
previously,” McCartney said. “Even more exciting because this time round you could hear us!”

McCartney opened the new “Shea” stadium, New York’s Citi Field, in front of 120,000-plus concert goes. Afterwards, buzz began that it was a concert for the ages. Moved by the response,
McCartney and his team poured over the tapes, both video and audio, and realized they had something truly special. 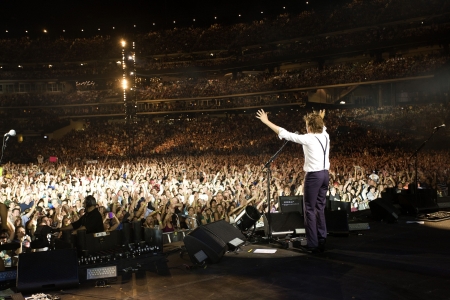 The result is Good Evening New York City that arrives in two formats: a 3-disc (two CDs and one DVD) standard edition and the deluxe version that features 4 discs with an additional DVD
that showcases more McCartney live as well as the former Beatle’s traffic-stopping performance at the Ed Sullivan
Theater on David Letterman.

McCartney’s latest features 30 plus songs and over three hours of music. Just a sampling of the tracks should induce awe by Beatles-McCartney fans: Drive My Car, Got To Get You Into My Life, The Long And Winding Road, Blackbird,
Eleanor Rigby, Back In The USSR, Paperback Writer, Let It Be, Hey Jude and Helter Skelter.

After McCartney left The Beatles is also well documented in Good Evening New York City with his classics Band On The Run,
My Love, Let Me Roll It, the pyrotechnic power of Live And Let Die and current McCartney solo material from Here Today to Flaming Pie and Dance
Tonight. McCartney tributes John Lennon as well with a medley of A Day in the Life and Give Peace a Chance!

Dierks Bentley and you making a difference