Ghost Whisperer presents an all-new episode tonight and SheKnows has an inside look at the Jennifer Love Hewitt mystical smash.

Devil’s Bargain is the title of tonight’s Ghost Whisperer and with a moniker like that, all Hell could break loose for Melinda (Hewitt). 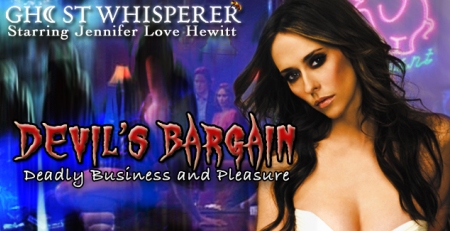 Eli (Jamie Kennedy) and Jim (David Conrad) come together to solve a crime when each of their superiors become possessed by ghosts. The guy’s bosses, Mark Moses and guest star Bruce Davison,
share a secret that could be the key to the entire mystery. There is a woman haunting them who went missing years ago that gets Melinda (Hewitt) involved. Where it puts her is nothing like you have ever seen before on Ghost Whisperer.

The November 6 Ghost Whisperer is an extra-special episode in that it is written by the show’s executive produce PK Simonds.

The song list for the November 6 Ghost Whisperer tonight has been released:

All of the Ghost Whisperer featured music appears on the show’s MySpace page.

An inside look at the episode airing tonight at 8 pm on CBS.

Sonya Walger gets Lost on FlashForward