These were the hottest entertainment news stories for the week ending November 6, 2009. 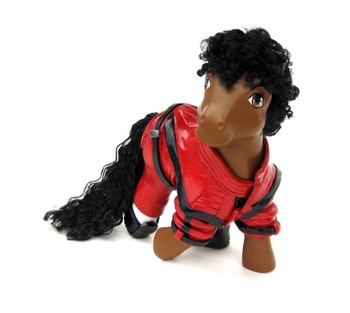 Michael Jackson My Little Pony for the win! Finnish artist Mari Kasurinen has a whole collection of these magnificent creatures, including Lady Gaga, Jack Sparrow, Elvis, Gene Simmons, various Star
Wars characters, Edward Scissorhands and more — but we couldn’t resist MJ. This Thriller of a My Little Pony is the best dressed celeb we’ve seen all week!

Backlash over Rihanna’s Woman of the Year status

Glamour magazine gave Rihanna their Woman of the Year award, ticking off a lot of people along the way. Why? Rihanna’s sudden
willingness to discuss a situation she previously kept mum on — while not really doing anything to help battered women besides talk — and promoting her album in the same breath strikes many as
opportunistic and insincere.

Is avowed Catholic Mel Gibson allowed in his church anymore? He just became a father for the eighth time to an illegitimate child with his
mistress. Pretty sure the Church frowns upon that, but if you pour enough millions into the coffers like Mel does, everything seems to be forgiven.

Josh Duhamel is in deep doodoo

Don’t you just love chatty strippers? They have the best stories, like this one about how Josh Duhamel cheated on Fergie, his wife of less
than a year, while on location in Atlanta. Ms. Stripper says Josh was all over her lovely lady lumps. The reps for both performers deny, deny, deny but the stripper passed a lie detector test, and
neither Josh nor Fergie are talking lawsuit.