Rihanna has been named Glamour Magazine’s Woman of the Year — but not everybody is happy about it. 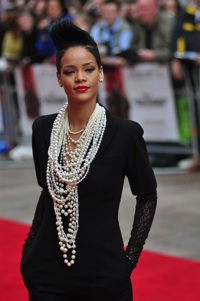 The Bahamian singer lived through a nightmare last winter when
she was badly beaten and publicly humiliated by then-boyfriend Chris Brown. But instead of using the experience as a teaching moment for
her millions of young fans, Rihanna chose to briefly return to the dangerous relationship and has not spoken out against dating violence
until now — coincidentally when she has an album to promote.

And this has many crying foul.

“Whether she likes it or not, (Rihanna) is a role model to the young women who buy her albums and emulate her style,” said CNN’s Showbiz Tonight producer Kristyn Martin. “Her silence for
the last eight months is a decision I respect — it is her business. But the fact is, that silence has sent a mixed message to her young female fans about domestic violence.”

“Rihanna should be commended for finally speaking out about domestic violence. I imagine it took a lot of courage for her to discuss such a personal tragedy so publicly. But that doesn’t
qualify her to be honored in Glamour Magazine‘s ‘Women of the Year’ issue… that doesn’t make Rihanna a prime candidate to be celebrated in Glamour Magazine with Maya
Angelou and Michelle Obama.”

In the Glamour article, Rihanna briefly discusses the experience (read our write up here) but makes no reference to supporting any
domestic violence organizations or starting any programs of her own.

In fact, all she seems to have done so far is talk about it while promoting her new album, Russian Roulette. Does a little talk and even less action qualify Rihanna for Woman of the Year status?

Let us know what you think with your comments below!

More from Rihanna’s interview with Glamour