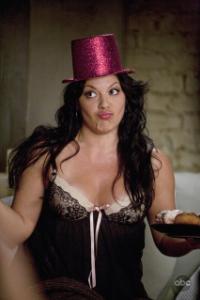 The Thursday night
block kicks off with Arizona getting quite a birthday surprise on Grey’s Anatomy. Her patient’s grateful parents donate $25
million to the peds program, but she doesn’t get to enjoy the high for long. Half of the gift is earmarked for finding a cure for their son’s condition and when the child takes turns for the worse,
the father urges her to “buy him more time” with a dangerous procedure.

On a more personal front, Alex could use a donation himself. With Izzie still MIA, he’s expected to handle her outstanding medical bills.

Too bad for him he doesn’t know she’s due back for next week’s episode — or maybe too bad for Izzie? This hurtle may be just the thing to pull Alex and eavesdropping newbie April closer before
Izzie returns.

Meanwhile, the honeymoon may be over for Cristina and Owen — not that there ever really was one. When she misses out on a big surgery, he knows she’ll be angry, so he warns Cali not to bate her.
Cali isn’t sure ignoring the “scalpel hungry animal” is the best plan — and she’s probably right!

Then, on Private Practice, Pacific Wellcare treads on controversial ground. Even Naomi is taken aback by the newest member of her staff,
who is hired for his work with genetically designed babies. She rails against the big boss for talking to her first and says the newcomer, who supports eugenics, “has no moral center,” but he
orders her to make it work.

Charlotte is also working on settling into new stomping grounds. As the new sex specialist in the practice, she offers a thank you gift to her female colleagues: massaging vibrators!

And finally on the road to recovery, Violet has a new take on life. She decides she’s going to say exactly what she thinks from now on. That sounds reasonable, but is sure to ruffle feathers!

The drama kicks off tonight at 9, on ABC with Grey’s Anatomy and Private Practice.

Read on for more Grey’s and Private Practice