Josh Duhamel is already in the dog house after allegations he cheated on new wife Fergie with a stripper! 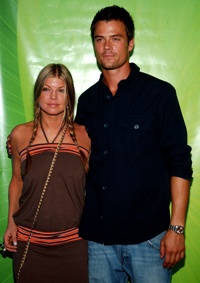 The Enquirer supposedly caught wind of the story after they were notified by someone on the set of the flick Duhamel was filming in Atlanta, where the actor was overheard bragging about
his conquest. The tabloid then tracked down Forrester.

“Josh bragged about what happened on the set of his movie (Life As We Know It), and someone called The Enquirer with the tip,” Forrester’s lawyer Romin Alavi told Us
Weekly.

They paid the single mother of two $20,000 to talk, but insist she passed a rigorous lie detector test.

“This is not the first nor will it be the last time that a stripper was paid a large amount of money to sell a false story about a celebrity,” Duhamel’s rep to People. “This story is
absolutely ridiculous.”

Tellingly, while Fergie and Duhamel‘s reps are denying the story there has been no mention of a lawsuit — and now a long line of women are
coming forward with admissions that they too hooked up with Duhamel at some point during his relationship with the Black Eyed Peas singer.

And check out this blind item spotted earlier this week on Crazy Days and Nights:

“Actor and a singer. What you might not know though is that the actor has been to scared to even cross paths with his wife except in the most public of places for fear that she will go off on him
physically and verbally. To say that she is going through this event quietly would be very wrong. In fact, just this morning everyone in LaGuardia airport could hear her yelling at him on the
phone.”

The couple put their PR machine in overdrive and were supposedly spotted eating dinner together this week at a restaurant next to the
hotel where the alleged tryst took place.

Rihanna speaks out on domestic violence

Mel Gibson is a dad again