The Twilight Saga: New Moon has two new video clips for SheKnows including an inside look at the vampire ruling class, The Volturi.

Also in the New Moon SheKnows spotlight is a clip from the film called I Would Never Hurt You. Wonder who that is about?

The first Twilight, based on Stephenie Meyer’s iconic series, earned an astounding $69.6 million on its
opening weekend in November 2008. Look for New Moon to eclipse that figure on its November 20 opening weekend. 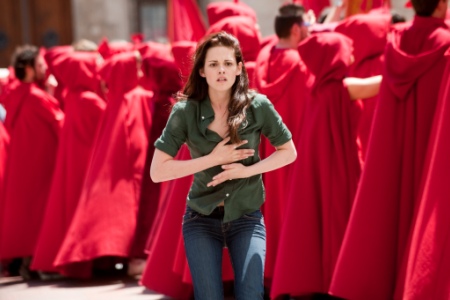 New Moon introduces some new faces to the Twilight saga including Dakota Fanning as a vampire with questionable motives. New Moon also has a new director, Chris Weitz, after
Catherine Hardwicke stepped down.

New Moon: Inside the Volturi

Impossible to escape is the screams from fans when Taylor Lautner appears on screen, with or without shirt. At Comic Con in July, this reporter felt what it must have been like when The Beatles
stepped on stage at Shea Stadium — deafening!

Up next…the scene from New Moon you do not want to miss!