TV legend Kelsey Grammer speaks exclusively with SheKnows about his esteemed career and latest comic character Hank. Grammer is joined by co-star Melinda McGraw to dish about their Wednesday night comedy and all that it entails to achieve comic nirvana.

Hank airs Wednesdays at 8 pm as part of ABC’s resurrected comedy night. The sitcom gets its due with Hank at 8 pm setting the evening’s hilarity in
motion. Grammer portrays Hank Pryor, a downsized, former high-flying executive who is seeking the right way back to success with his wife and family in tow.

Kelsey Grammer has had the rare distinction of apperaring on a hit show in three-straight decades. Grammer is also well on his way to his fourth in 2009 with the arrival of Hank.

Last year, the critically acclaimed pairing with Patricia Heaton won waves with Back to You, but aparantly not Fox executives. To the benefit of ABC, Heaton and Grammer have gone rouge and
both now call the alphabet network home. Heaton’s In the Middle is the perfect yin to the TV legend Grammer starring Hank’s yang. 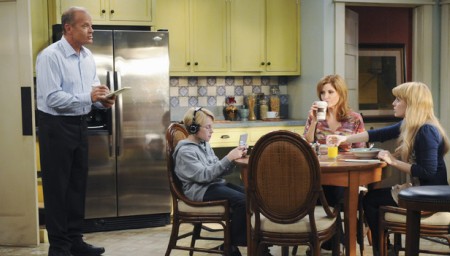 Grammer first made his mark on the ’80s classic Cheers before taking the character to Seatlle for the enormously successful and Emmy-dominating Frasier.

Sonya Walger gets Lost on FlashForward