Rihanna has unfortunately become an unwilling spokesperson for domestic violence so she’s stepping up to the plate to talk about it.

Grammy Award-winner Rihanna will speak in a television interview about the night she was beaten by Chris Brown. The 21-year-old indicates in an
interview with Diane Sawyer that domestic violence can happen to anyone. The interview will air on Good Morning America November 5 and 6. 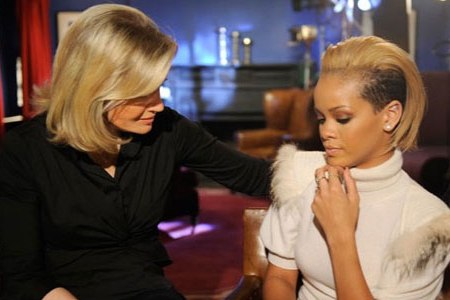 In the Good Morning America interview with Sawyer, Rihanna indicated, “This happened to me…it can happen to anyone.”

She also mentioned that Chris Brown was her first big love. You may recall the attack occurred in February. The R&B singer, 20-year-old
Chris Brown was sentenced to five years of probation and community service in August. Although he apologized publicly for the assault, with the release of his new single and discussing a new album,
Brown does not appear to allow Rihanna to move beyond his shadow.

The assault also resulted in Brown losing a few commercial sponsorships and it brought the conversation of domestic violence into the forefront. National media outlets, namely The Oprah Winfrey
Show, tackled the topic head on and although Chris has been relatively quiet in terms of media appearances since his fateful Larry King Live visit, Rihanna released a new single —
Russian Roulette — last month.

Read on for more Rihanna news

Rihanna and Katy Perry rock Jingle Ball, will they do it again?