So You Think You Can Dance ousted dancers share insight into the show’s first fall season. Brandon Dumlao and Ariana Debose get the SheKnows “three-quick-questions” treatment. 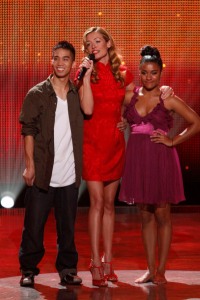 SheKnows: First, how surprised were you that Russell was in the So You Think You Can Dance bottom two with you?

Brandon Dumlao: I was so surprised because Russell is, of course, a fan favorite. I’m sure the judges love him, too. I feel like it might have been – like, when he was
announced, I kind of knew in a way that I might have been going home because he was amazing. This cast was amazing. Billy was such big shoes to fill that I felt it was unfair to even take another
guy’s spot. So, I was happy the way it turned out because I didn’t think it was fair for me to come in and take another guy’s spot because everyone earned it. I want to earn it
myself, so I really hope that, for Season 7, they let me come back so I can prove it myself.

SheKnows: Secondly, Nigel then said he wanted you to come back for season seven, how did that feel?

Brandon Dumlao: I did not expect him to say that. I really thought that was my only chance to be in the Top 20. I wanted to make the most of it, so for him to propose that to me
and let me come back for Season Seven, if that’s possible, that’s really crazy. Right after I got cut, I went and got into some ballroom class and took some more Hip Hop. I’m
ready. I’m going to keep taking classes if I can come back next season.

SheKnows: Third, what do you think about if you had been in the So You Think You Can Dance top 20 all along instead of having to fill in last minute?

Brandon Dumlao: I think I might have had a better chance just because the judges would have known I’m set the same standard as everyone else because when I did the waltz,
they kept saying, “He didn’t have enough time; he didn’t have enough time,” because they knew I replaced Billy. So, I feel like I would have done a better job. They
would’ve seen that I did a better job and would’ve taken that into consideration with the results, but I’m really happy the way I did. I’m really happy the way everything
turned out because this cast is so amazing. I can’t pick who’s going to win. Everyone is going to do so well. 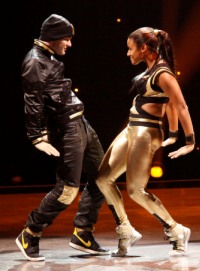 SheKnows: Hello Ariana, first up for you, I wondered you grew up on a farm. Where did you discover your love of dance? So many SYTYCD dancers seem to come from cities.

Ariana Debose: Well, my family owned a farm in Ivanhoe, North Carolina. It’s out in the middle of nowhere. We would have big family reunions out there, but I didn’t
actually grow up on the farm. That was a little misrepresented on the show. Well, I started dancing when I was three. My mom put me in class, and I just loved to move around. I loved music. Then, I
got really serious about it when I was probably around ten. What made me get really serious about it was the freedom that I felt when I was dancing. I felt like I was flying. I was just so happy.
It was fun. I mean, who doesn’t love to hear a crowd applauding for them?

SheKnows: Second, something new this year was the Meet the Top 20 feature, how do you think it added to the season?

Ariana Debose: I loved the Top 20 special simply because some contestants got more airtime than others. I was one of those contestants that you didn’t get to know during
Vegas Week. I was so excited that I really got to show what I could do and show America why I was in the Top 20.

SheKnows: Lastly, now that you have been on the show, will we see you move to New York or Los Angeles to pursue a dancing career?

Ariana Debose: Actually, I’m more focused on New York. I want to dance on Broadway. I also sing and act. I was singing and acting and dancing and all that stuff before I even
auditioned for the show. So, the show is just really another path for me. It just showed me another career pathway. So, I’m going to head to New York for a little bit and audition for shows
and commercials and movies and just see what happens. Honestly, I always have confidence in my dancing. I trust myself as a dancer.

So You Think You Can Dance airs tonight at 8 pm on Fox!

More So You Think You Can Dance news