Mel Gibson is a dad. Again. As in the eighth time! His girlfriend Oksana Grigorieva gave birth to a girl. 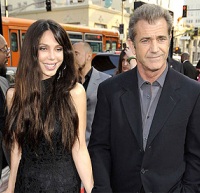 Alan Nierob, the spokesperson for
Mel Gibson, indicated, “Oksana Grigorieva and Mel Gibson welcomed the arrival of a baby girl named Lucia on Friday at an undisclosed
hospital in Los Angeles.”

The 53-year-old Lethal Weapon star has seven children with Robyn Gibson, six daughters and one son. The thirty-nine year-old Grigorieva also has a son with her ex-boyfriend, Timothy
Dalton. Having a big family is not unfamiliar territory for Gibson who was born in Peekskill, New York. After all, he’s the sixth of eleven children in his very own family. (Although he was
born in America, Mel and his family moved to New South Wales in Australia, hence the original Australian accent.)

You may recall that Robyn was his wife of almost 30 years before filing for divorce from Gibson in April. They had been separated originally in August 2006 which was about one month after he was
arrested in Malibu for drunk driving.

In fact, several months ago when he was on Jay Leno Gibson joked, “I guess I’m Octo-Mel,” alluding to all of his kids. His last film as a director was Apocalypto but
other than that, we haven’t seen Mel on the big screen as frequently as we have in years past. His last role as an actor was the 2002 flick, Signs. The Oscar winner is currently
working on The Beaver, a new film co-starring Jodie Foster.