Michael Jackson’s This is It takes the weekend box office battle — but not by the landslide predicted for the final look at Michael Jackson. 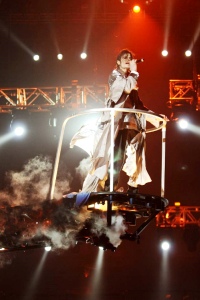 Halloween festivities were the big winners this
weekend, which meant nothing at the box office met expectations. With numbers down across the board, however, This is It took the
weekend with $21.3 million, putting the total at $32.5 million to date.

Those numbers are nothing to sneeze at, especially for a documentary, but in light of the renewed Michael Jackson fandemonium, Sony had
higher hopes for the film chronicling his final days.

With an eye still on breaking records, the movie’s much hyped “two-week run” has been extended through Thanksgiving.

Coming in at number two, Paranormal Activity continues to make a strong showing. With a few more theaters added to the release, it
earned $16.5 million this week, which puts the horror flick’s total take at $84.8 million. Not bad for an indie that reportedly cost between $10,000 and $15,000 to make, depending on whom you ask.

Don’t miss our exclusive interview with the Paranormal Activity stars.

Law Abiding Citizen moved up to the number three spot with $7.3 million, while Couples Retreat also
managed to stay in the game. In spite of mixed reviews from critics and just about anybody you ask for an opinion, the Vince Vaughan vehicle moved back up to fifth place, with $6 million this
weekend and $86.6 million total.

Creepy Saw VI rounded out the top five with $5.5 million.

Where the Wild Things Are inspired a slew of Halloween costumes this weekend, but dropped into the bottom five with $5 million;
followed by The Stepfather, with $3.4 million; Astro Boy and Amelia — each with $3 million and Cirque du
Freak with $2.8 million.