New Moon has given SheKnows readers an early treat — the longest high-definition trailer released to date.

The Twilight Saga: New Moon lands in theaters November 20 and SheKnows has your complete coverage.

From in-depth chats at 2009 Comic-Con with Robert Pattinon, Kristen Stewart and Taylor Lautner to our exclusive one-on-one
interview with Twilight author Stephenie Meyer, SheKnows Entertainment has always had Twilight covered.

In this latest and greatest preview, fans get over two minutes of New Moon tantalization in high definition, no less.

After there was even a consideration that the Twilight series would go on without Taylor Lautner, watching the
actor as Jacob in the first trailers it was easy to see — the actor had flexed his power.

First of all, can you believe they have finished filming Eclipse already? We don’t want to get ahead of ourselves before the latest Twilight installment hits theaters
November 20, but with the third chapter wrapped, our excitement level has shot even higher — if that is even possible in this Twilight-crazed world. 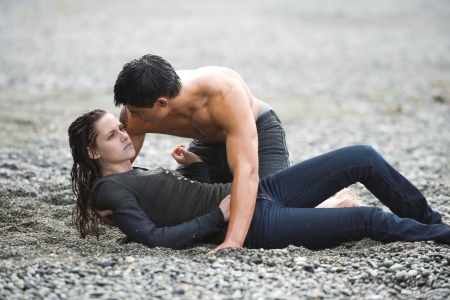 New Moon will launch deeper into Bella’s world as she sifts through the conflict that is Edward leaving and Jacob arriving. Edward is never far away and Jacob is determined to care
for Bella and is honestly a little to hot to ignore.

The first Twilight film hit theaters November 21, 2008 and almost exactly a year-to-date, the second chapter of Meyer’s vampire opus hits screens. Since that date, millions more have
been added to the Twilight fandamonium. The book series has found new fans and as the first film hit home video, those who never thought they would enjoy the Twilight series,
inadvertently found themselves picking up a piece of pop culture candy only to discover themselves hooked when the final credits rolled.

As for the third chapter in the Twilight series, Eclipse, the release date has been announced and surprise…it’s a summer movie — June 30, 2010!