Joshua Bell is getting ready to make his first appearance on Conan O’Brien’s The Tonight Show. Bell phoned SheKnows from the late-night institution’s makeup chair to discuss life as a crossover classic artist with his At Home with Friends CD. 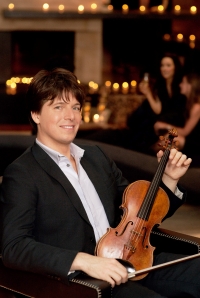 This is not Bell’s first
visit to The Tonight Show. Bell’s a phenom from way back and first graced the Tonight Show stage when Johnny Carson was host and he was only a teenager. This Grammy winner,
who released his first album at 18, got his start when he received a violin from his parents after they discovered Bell plucking rubber bands strung to his dresser.

The virtuoso’s new CD, At Home with Friends, is in stores and features sonic succulence in the form of duets with superstars Sting and Josh Groban, among many other music icons. Also
on At Home with Friends: Holiday classics such as O Holy Night performed with Emmy winner and Tony-nominated America’s sweetheart Kristin Chenoweth.

SheKnows: How are you today?

Joshua Bell: I’m okay — a little stressed. I’m backstage at the Tonight Show. I’m about to go on in an hour or so…

SheKnows: Is this a first for you with Conan?

Joshua Bell: It’s first with Conan on The Tonight Show. I’ve been with Conan three times before when he was in New York. The last time I was on
The Tonight Show was 18 years ago with Johnny Carson. So, it’s not a first for either, but it is still quite exciting… and stressful [laughs].

SheKnows: As a classically trained artist, do you take an extra ounce of pride knowing you have a wide audience on a national show that, unfortunately, rarely features this genre?

Joshua Bell: I know it’s not all that often that they have classical people on things like this, and I’ve always made an effort to extend myself to these sort of
things. Today, I wouldn’t say this is exactly my genre because this album represents all types music. I have with me a Cuban band. But, by doing something like this, it does bring people to
my world and back to the classical world — which I do find happens a lot. A lot of people have come to my concerts who say they don’t ever go to classical concerts, but they happen to have
heard me on Josh Groban’s record or something like that. It does have that effect.

SheKnows: Was it a special joy for you to tackle this record in particular? It’s slightly different…

Joshua Bell: It was certainly a joy. Most everyone on this record is an old friend. I have dabbled in these various worlds for years. This is the first time I’ve put
them together, all in one place. It was certainly a challenge, but I like challenging myself in this way. I learned a lot from playing really, really great musicians in these other genres. Edgar
Meyer, for instance…

I went to school with him at Indiana University. He was the one who really brought me the first time to another world with his bluegrass. That was such an amazing learning experience that
I’ve really made an effort to seek out other types of musicians. Even if I’m not totally successful at being an Indian or Latin violinist, it does stretch me. I bring my own musical
take on everything I do — no doubt about it. It’s the language I come from.

SheKnows: I don’t believe the audience would want it any other way. Do you also get that inspiration from working with film? You do a lot of work on film scores.

Joshua Bell: Yeah, actually. Film in particular is basically classical music — it’s just with certain kinds of restrictions. I had a good experience with my first film,
The Red Violin. It was such a rich experience that it got me hooked on film. It’s fun to do what I do but in another world. With film, I get to go to film festivals and meet actors
and people I never would meet in my normal circles. It’s fun to dabble like that.

SheKnows: Was it always the violin for you?

Joshua Bell: It’s really the violin. I grew up listening to my mother play the piano. Before I got the violin, I used to string rubber bands on my dresser drawers and pluck
out tunes on that. Then my parents found me a violin. It’s really been the violin from the beginning. It’s also presented enough of a challenge that I don’t feel compelled to
tackle another instrument until I get this one right.

SheKnows: What violinists inspired you as you were growing up?

Joshua Bell: Certainly, I had a lot of heroes. The first would be my teacher, Joseph Gingold, who really came from the old era. He was a link to all the people who became my
heroes. Fritz Kreisler… Jascha Heifetz was probably number one — my God of violin. There are certainly many, but most are from the really old school of playing.

SheKnows: As they say, go break a leg out there on The Tonight Show.