Something’s always sizzling here in Manhattan. You can always count on the Big Apple for some good old-fashioned excitement, and the Rock and Roll Hall of Fame anniversary concert did not disappoint. 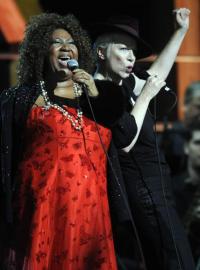 Madison Square Garden was the site for the Rock and Roll Hall of Fame 25th anniversary concert that featured five hours of music including performances by Crosby, Stills and Nash, Stevie Wonder, Simon & Garfunkel and Bruce Springsteen.

As Tom Hanks talked to the crowd, he simply asked if rock and roll needs a hall of fame. Immediately answering his very own question,  he said, “Yes. After 50 years of rock and roll, yes.”

Fans enjoyed a real treat as Paul Simon did a rendition of Runaround Sue and Springsteen welcomed the legendary singer and bandleader Sam Moore. Stevie Wonder and John Legend did a tribute to Marvin Gaye with Mercy Mercy Me, and then they rocked a Michael Jackson tribute with The Way You Make Me Feel.

Let’s not forget some other highlights: Jerry Lee Lewis tickling the ivories with a Whole Lotta Shakin’ Going’ On, and montages of rock history moments such as Woodstock, Jimi Hendrix’ guitar-burning, and Elvis Presley on The Ed Sullivan Show.

Stevie Wonder’s performance wasn’t just limited to two songs. He crooned with Smokey Robinson and performed with BB King. To cap off the night, Bruce Springsteen and the E Street Band did a set, Billy Joel made a cameo appearance, and then the show closed with the grand finale: Your Love Keeps Lifting Me Higher and Higher.