She was on the mound at Yankee Stadium for Game One of the World Series and now she’s heading from the 161st and River Avenue to Sesame Street. Yes, that’s right, First Lady Michelle Obama is going to celebrate the 40th season of Sesame Street. 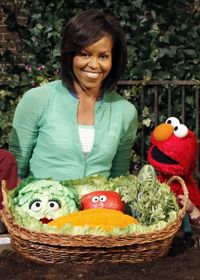 Michelle
Obama is not alone in the celebration. Forty years on the air is quite an accomplishment for Sesame Street so on November 11th, Michelle Obama will be on the show again. She previously said it was one of the best things she’s ever done so why not have an encore
performance, right? She’ll return on the show to hang with Elmo and crew.

It may make sense to watch it for other celebs, too. After all, Jake Gyllenhaal will be on Sesame Street for Shalom Sesame, a twelve part series of episodes which will teach
Jewish-American viewers about Jewish culture.

Of course, we all know about Sesame Street, a show based on a small street where children and furry puppet monsters learn their A, B, C’s and 1-2-3’s and other pre-school
subjects taught in MTV-quick video-like (though it was prior to MTV) formations.

What you may not know is…Big Bird is played by…a woman! Everyone has their favorite character where its Bert and Ernie, Grover, Oscar the Grouch or Big Bird.