Corey Feldman’s wife of seven years has slapped him with divorce papers. 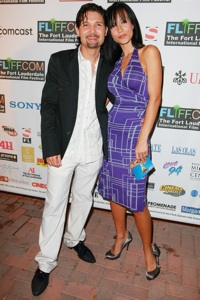 Of note: Instead of requesting joint custody of the couple’s 5-year-old son Zen, Susannah went for full legal and physical custody, with Corey allowed occasional visitation.

Why the split and the custody question? Susannah remains mum on the subject, but some speculate that Corey has started using drugs again after the death of his idol, Michael Jackson. Others suggest that Susannah’s after the cash (full custody will get her higher child support payments). But can Corey Feldman really have all that much money left?

Corey is talking, but not about anything juicy. His rep says, “Corey is deeply hurt and saddened by this unexpected change in their relationship, and has done nothing to contribute to the
demise of the marriage.” (Translation: He is totally bummed, and nothing is his fault.) “He is hopeful that he and Susie can work to resolve this quickly and amicably, and he is fully committed to
doing what is best for the welfare of their son.”

The couple met at a bar and married nine months later on The Surreal Life, on which Corey was appearing. MC Hammer officiated the ceremony.

In 2007, Corey talked about how being a husband and father turned his life around. “Six years together and we’re still in love,” he said.
“Whereas I used to get depressed or neurotic or dwell on things, I see my son’s bright eyes and smile in the morning, and suddenly, I don’t feel like I’m depressed anymore. There’s nothing to be
depressed about when you’ve got that.”

Andre Agassi admits past meth use