Fans across the country lined up to see the highly anticipated Michael Jackson film, This Is It — and they weren’t alone in their eagerness to see the King of Pop’s last performance. Celebrities such as Will Smith, Jennifer Lopez, Katy Perry, Adam Lambert, David Cook and Paris Hilton attended the premiere in Los Angeles. 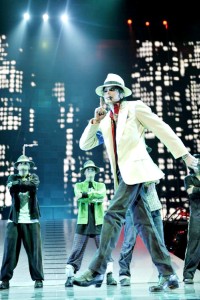 Filmed only a few weeks before MJ passed, This Is It shows Michael Jackson rehearsing for a series of London concerts which, as we
all know, were cancelled upon his death. Although Jackson’s June 25th passing was ruled a homicide, the fact of the matter remains: He is no longer with us.

The pop icon’s brothers also attended the premiere on Tuesday night. Other celebrities in attendance included Neil Patrick
Harris and Jennifer Love Hewitt. Paula Abdul even tweeted about being in awe of the documentary at the Nokia Theatre in LA:
“So many emotions are coming up for me. I can’t believe he’s gone. Brilliant.”

The film’s associate producer and tour choreographer told The Los Angeles Times that Michael would have loved the turnout for his film, This Is It. He said,
“It’s time to celebrate Michael, to rejoice in all his wonderful messages of peace and love. People are going to enjoy seeing the Michael I always got to see.”

Although the film opened in theaters nationwide yesterday, several advance screenings were held around the world on Tuesday night in anticipation of the big release.

Michael Jackson’s new single This Is It!