Adam Lambert’s upcoming album For Your Entertainment isn’t due out until Nov. 23, but it’s already entertaining — or at least it has us talking! 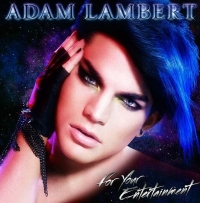 Lambert debuted the glam-tastic album cover this morning and the retro look is getting mixed reviews.

Lambert’s For Your Entertainment cover immediately puts one in mind of David Bowie’s androgynous heyday and the glam of the ’80s. The question being raised is whether or not the look is “too campy,” but Lambert isn’t going to apologize to those of us who answer “yes.”

In fact, that’s what he tweets he was going for: “Thank you to those who appreciate and understand that the album cover is deliberately campy,” he posted on twitter this morning. “It’s an (h)omage to the past. It is ridiculous. For those that don’t get it: oh well… Glad to have gotten your attention. Androgyny. Rock n Roll.”

The real issue here may be that not everyone in America appreciates “camp” — and some of us were born too late to get this particular brand. Lambert’s flamboyant showmanship earned him the number two spot on American Idol last season, but many maintain it’s also what kept him from the big win.

SheKnows always appreciates a nod to the past — and this particular reporter loves her camp — but we can’t shake the feeling that we’ve actually seen this cover somewhere before. 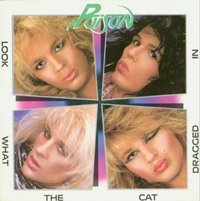 Of course, that familiarity could just be a reflection of the perfectly ’80s fonts, colorization and look, which are so right on the money that the album has some folks crying “cheesy” and “over the top,” instead of “camp” – but isn’t that just what camp is? For example, we give you: Poison (at right).

Judging an album by its cover

Beyond passing judgment on the look, SheKnows is curious how the album inside will reflect the packaging, so we scoured Lambert’s tweets to get more news on what’s will be inside this retro cover.

Lambert’s posts have him working with the likes of Muse, Justin Hawkins, Dr. Luke and Howard Benson, using a full string orchestra for one song and promising, “This album is gonna be Siiiiiiiiiiiick.”

Play on Lambert, play on. American Idol proved your fans will follow — just as long as your music delivers!