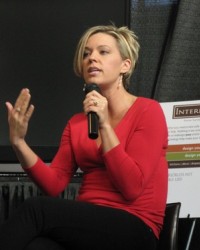 Although she’s often publicly
complained about being in the spotlight and having paparazzi outside her home 24/7, it sounds like she may actually enjoy being in the limelight.

Gosselin stated, “I’ve done enough years on TV that I feel like it’s a normal, comfortable, natural place to be. I’d love to be in a movie
at some point, I’d love to be the voice of a cartoon character in a movie for my kids. I think that would be fun.”

While she isn’t opposed to re-marrying as she says she really doesn’t want to be married again, it’s a Catch 22: she also doesn’t want to be alone. “The alone-ness is
really alone.” As the thirty-four year-old answered questions, she mentioned being in the spotlight has made it difficult to maintain friends.

She said the fame and attention has not negatively impacted her kids. “They’re not suffering from this,” she said. “The fact that they have these different experiences they need to handle is only
going to help them in life.”

Keep in mind this woman isn’t only going through a divorce in public, she’s still raising eight kids. When asked if divorce pushes her to the edge, Gosselin was authentic in her answer. “Hello, have you seen out show?” she asked. “Yes, I do flip out.” With enough to handle in terms of
maintaining the household and raising the children, the dogs are no longer part of the family. Kate indicated she got rid of them because she had too much to handle. If things calm down at some
point, it sounds like she is open to having them back in their lives.

“I knew the dogs needed more than I could give them. Are they gone forever? I’m hoping not.”

Has Rosie split from her wife?