Halloween descends on Manhattan tonight, giving Gossip Girl tons of tricks and treats to dole out to her followers! 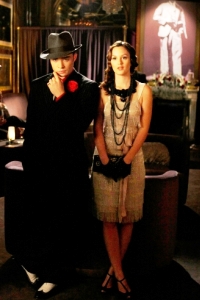 Dan thought
dating Serena was rough, but his budding relationship with mega star Olivia (Hilary Duff) has a tendency to swing from treat to trick, and fast.

Case in point, the couple is ready to take their relationship to the next level… until his superstar girlfriend gets caught with her hand in the cookie jar, not to mention her past with
vampires!

After gossip queen Perez Hilton publishes a shot of Olivia grabbing free condoms, chatter resurfaces about her past flame, uber hotty star Patrick Robinson (Simon Miller). The whole thing blows up
when Dan makes the mistake of screening some of her old work with Patrick — namely, their steamy, vampiric sex scenes!

Chuck gets his own fright on Gossip Girl when he realizes his new hotel isn’t getting the attention he’d hoped to see, so he
decides to open big with a Halloween party at the club bar — with one day’s notice.

While he calls in an assist from publicist in training Serena, he forbids her to involve Blair. In fact, he goes so far as to un-invite her!

It seems he’s still smarting from last week’s fiasco, when Blair tricked him into kissing a boy for one of her schemes. It isn’t that Chuck is a homophobe, but rather that Blair conned him into doing it, instead of letting him ride the manipulation
express with her.

Of course, Blair always has a plan, and this one it involves Chuck’s big opening night.

Not everyone is as prepared as Blair, however. Back at Constance, Queen Bee Jenny is still having growing pains. She’d hoped to lead with a softer fist than her predecessor in a new reign of
freedom, but by last week, it was clear she’d accepted all the bitchy duties of her post.

This week, however, she crosses the line with best pal and step bro Eric, and will have to decide whether she can bare the weight of the crown. Is she too nice to be Constance’s bad girl?

Tune in tonight to Gossip Girl and find out.

Ed Westwick checks in for a chat