With New Moon ready to cause mayhem at theaters next month, the soundtrack is already getting serious play. 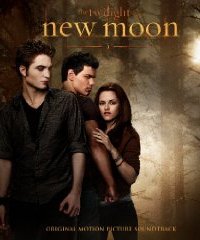 The New Moon Soundtrack
took the number two spot on the Billboard 200 this week, and that was only with three days on the market!

The album was originally set to drop October 20, a month before the movie, but was bumped up to Friday, October 16. That means the 115,000 copies that landed the soundtrack in the number 2 spot
were sold in only three days!

Many expect the uber-indie compilation of songs to take the number one spot after its first full week on the market. While it’s hard to beat the Twi-hard’s fandemonium, however, Tim McGraw’s new
Southern Voice is also in the running for the number one stop this week:

It’s a showdown between the Twilight craze and our country’s obsession with country!

A moody mix of rock, techno and folk, the New Moon Soundtrack is composed of songs written for the movie and thus, the over all vibe reflects the darkness of New Moon, which centers around Bella’s depression and kicks off the series’ infamous vampire/human/dog love triangle.

Check out Death Cab’s video for Meet Me On The Equinox, which previews the next chapter of Forks drama with clips from the movie.

Death Cab: Meet Me On The Equinox

The cast of New Moon chat with SheKnows

U2 live from Pasadena!