On October 23 U2 took the stage in Pasadena, California at the famous Rose Bowl during their U2 360 tour to promote their latest album, No Line on the Horizon and the world was watching on YouTube. SheKnows has the entire concert!

Normally the seats filled to capacity can handle 96,000 people however their audience wasn’t limited to people who were in Pasadena that night. That’s right! The show was streamed live
on YouTube, an unprecedented event! 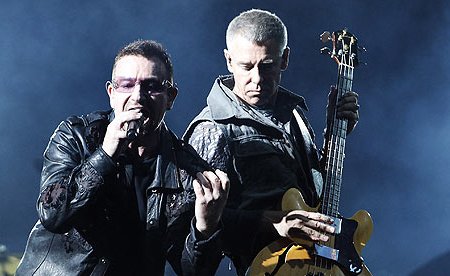 This was new to U2 as well as YouTube as millions of people around the world were able to watch the show live.

The bummer for most of us is realizing after the fact that it was aired in real time but fret not. The show will be archived on the site so people who missed it (or even people who already saw it
and want to watch again), can watch U2 perform. Their 24-song set included hits everyone knows and loves like Vertigo, Sunday, Bloody Sunday and One. They also
sang Ultraviolet (Light My Way) from Achtung Baby.

No stranger to the camera, Bono frequently played to the cameras knowing their concert would be captured for their online audience. For U2, however, their album No Line on the Horizon represents
their least successful album since 1993 and yet their current tour is considered one of the biggest concerts ever. The tour will end next Wednesday night in Vancouver. At that point, U2 will take a
break until they rev up their engines again in June.

U2 live in Pasadena!

This is It ready to premiere