Ivanka Trump married sweetheart Jared Kushner over the weekend at a lavish fete hosted by The Donald himself. 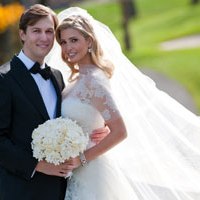 With so many celebrity deaths in the
news lately, it’s refreshing reporting on happier times like a celebrity wedding. This past weekend was just that as Ivanka exchanged vows with Kushner, the publisher of New York
Observer.

The wedding took place at the Trump National Golf Club in New Jersey in a beautiful ceremony. Ivanka wore a Vera Wang gown that was originally inspired by Grace Kelly. Their wedding punctuated the
three month engagement with 500-plus guests including Regis Philbin.

Although many of her fans weren’t aware of the actual wedding date, on Saturday night she dropped hints that her big day was approaching.

She tweeted, “At a very casual ‘rehearsal’ dinner with friends — just 5 of my lady friends and me having a casual dinner and getting excited.” 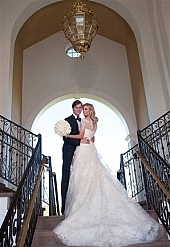 On Sunday morning she woke to
a workout and simply tweeted more information about the exciting day which was about to unfold. “Just finished a gorgeous hike. The leaves are spectacular and the sun is shining. Everything
is simply perfect! I’m getting married today!”

Ivanka is the co-host of Celebrity Apprentice and a vice-president at her father’s real estate company. Her husband is an executive at the Kushner Companies. The power couple
released a few public photos while keeping most details about their wedding day private. Donald dished to People about his simple toast: “Be happy and enjoy your life.”

Has Rosie split from wife?