Rosie O’Donnell more than hinted at a possible split with her wife in a recent interview. 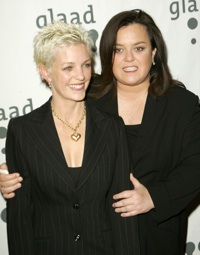 After several months of occasional cryptic blog posts on the
subject, Rosie told USA Today that she and partner Kelli Carpenter are on the rocks.

While not confirming reports that Kelli has moved out of the couple’s Nyack, New York home, Rosie acknowledged the relationship has difficulties.

“We’re a family, we remain a family and we’re working on the issues,” Rosie said. “Kelli and I love each other very much and we are working on our issues. Those are the only words I am ever going
to say. Ever. And that is something that has been agreed upon by all parties.”

In an August blog entry, Rosie wrote about being asked about the breakup rumors by a TMZ photographer.

“marriage is hard i told him

when u r married 12 years

lemme know how it goes

Rosie and Kelli legally married in San Francisco in 2004, two weeks after Mayor Gavin Newsom authorized granting marriage licenses to gay
couples, but have considered themselves emotionally married for far longer. They have three adopted children and one via artificial insemination.