These were the hottest entertainment news stories for the week ending October 23, 2009. 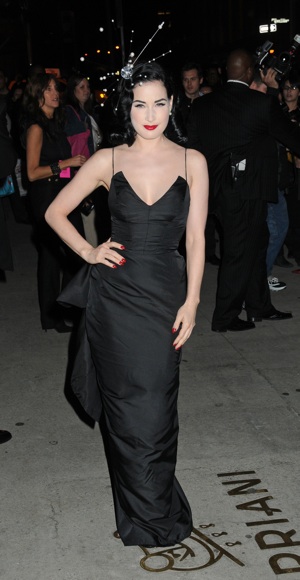 Dita Von Teese never fails to look anything less than perfect — and by “never,” we mean this woman looks flawless leaving the gym in paparazzi photos. But her black gown worn at the Fashion Group
International’s 26th Annual Night of Stars takes perfect to a whole new level. The drape around the hips is just soft enough to add interest without inches, while the waist accentuates her
hourglass figure. The most special detail is the straps: See how they’re set wider than the top of the bodice? Lovely. And as for the hat… well, high fashion is all about taking risks, and it
works for her schtick.

Another week, another Jon Gosselin story. Perhaps his 2009 gut is from us feeding his ego so much. Anyway, in the continuing saga of the Gosselins, TLC is suing Jon for breach of contract after he told crews to shut down production and barred them from his property. He says it’s for the sake of
the children. TLC says it’s because they would not ignore the exclusivity clause of his contract and look the other way while he filmed a new reality show. We say we’re tired of this guy and his
grody Ed Hardy tee shirts.

A sparrow is the cover model for People magazine this week — Nicole Richie’s new baby, Sparrow, that is. Richie and her new son
share the spotlight as the new-again mom talks about life with two babies.

The John Travolta extortion case ended in a mistrial when the judge suspected jury misconduct. Will the case be retried? No definite dates
have been released, but we can’t imagine Travolta and Kelly Preston will allow anyone to take advantage of them over the death of their son, Jett.