Hilary Swank tells SheKnows she has no fears of flying and it is evident in every inch on screen of her portrayal of Amelia Earhart. “She’s a daredevil,” said Amelia director Mira Nair of her star.

Swank is a two-time Oscar-winner whose story has been often told. Her mother sacrificed everything to pursue her daughter’s God-given talent as an actress. After years toiling in television,
including a stint on Beverly Hills, 90210, Swank blew audiences away with her Oscar-winning turn in Boys Don’t Cry. The impeccable talent then followed with the Clint Eastwood directed Million Dollar Baby that also landed Oscar gold in her hands. 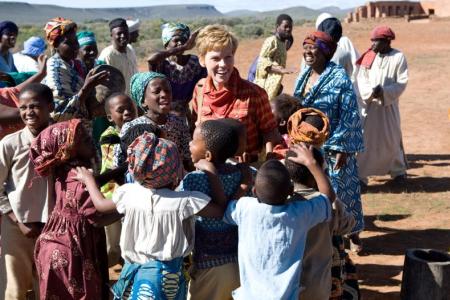 Proof of her mother’s passionate belief Swank’s tremendous thespian gifts are repeatedly shown with each successive Swank film. But rarely has Swank’s power packed the resonance
or historical significance of portraying Amelia Earhart in the aviatrix’s first true Hollywood portrait.

Amelia begins and ends with Swank. After witnessing the picture, there is no
other actress working today who could have better captured Earhart’s essence. Perhaps that’s the secret to what could make Amelia an early Oscar contender for Swank once again — it
took decades for an actress worthy of the challenge to arise and gutsy enough to relish in it.

SheKnows: When you were exploring Amelia Earhart as a character and filling in the layers beyond the icon, what elements of her personality that most surprised you?

Hilary Swank: I didn’t recognize truly how unapologetically she lived her life. I found it quite remarkable. At the same time, she wasn’t threatening to people. She
didn’t live it in such a way where she left a bunch of people behind. She cared about people at the same time. She stuck up for people. I found the more that I read about her, the more
endearing she became. Usually, someone will do something remarkable and as you read about them you kind of go “oh” (Swank pretends to turn a page in a book while making a shocking
face and laughs). For me, I just kept going, “What? This is someone I wish I could meet and talk to.” I think it is why people are so excited about her story. 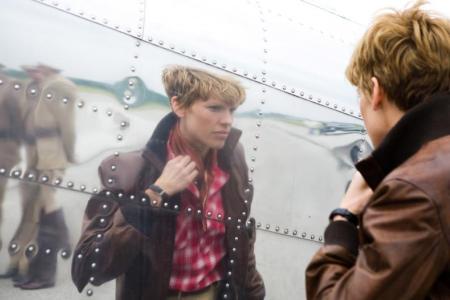 SheKnows: Do you think how she sees herself as a woman is a theme of Amelia? There’s a scene where she talks about not liking her legs, she’s so vulnerable.

Hilary Swank: Being an actor we are constantly objectified. Things are thrown at us about what we look like, how we should look, we’re not this enough or that enough,
it’s easy to look at yourself in those terms. I think ultimately there are so many different ways a person is beautiful. To think that Amelia would talk about herself in those terms was so
remarkable when she was so beautiful and accomplished so much, she achieved so much and was sticking up for the inequality of people who were facing adversity, for women’s rights, so to see
that she was human in that dislike or herself, it was a very vulnerable moment.

SheKnows: How do you believe Amelia and her story speaks to women today?

Hilary Swank: I think she’s an inspiration to women today too. What’s incredible about this movie to me is I’ve never had such an outpouring of people coming up
to me saying, “I cannot wait to see the film.” More than any of my other films I’ve ever been a part of, I really have to say is what a lot people know of Amelia is what you
learned in textbooks. This iconic image of who she was, but people realize this was a woman in a time when following your dream was a man’s job, is an inspiration to us to continue to follow
our calling. But, even take it a step further; I think this was a person who made no apologies for living her life the way she wanted to live it. If she was living in 2009, it still would be ahead
of our time. I think it’s very challenging to live our lives on the path that we want, whether you’re a woman or a man. To me, I think anything, that is what people are responding to
and it’s exciting to see, especially in the difficult economic times we’re living in and through, 70 years after she was living, we are still dealing with a lot of the same issues.

SheKnows: A big part of your Amelia performance is the accent. There is not much out there with her voice on it, how did you find your sonic tone for Amelia Earhart? 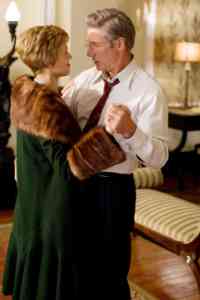 Hilary
Swank: I know exactly to the minute how much (footage) is out there (laughs). There are about 16 minutes of newsreel on Amelia. It’s not all talking and a lot of that is her
waving (laughs). The things of her speaking are limited. A lot of the stuff of her speaking are of when she had her public persona on. I found about 45 seconds of when she didn’t
know the camera was actually on so I got a little bit of insight not public face. Which was insightful for me and something I grabbed onto because, I didn’t want to parody her. That accent
was very specific. The cadence in which she spoke was very specific. The way she carried herself was very specific as it is for all of us. Those were big shoes to fill. I couldn’t take any
fictional license that I could actually take with someone else. But, it was a daunting task. I felt something I had to study to do justice for her.

SheKnows: What were your greatest resources then to capture that essence?

Hilary Swank: Three things, what we have on her newsreels, and then the literature on her, and the firsthand stuff of her letters and her correspondence. But, I will tell you, she
was such a private person as you see, that getting to know what she really felt was an effort in reading between the lines. It’s not really on the page even when she wrote about it.

SheKnows: Was there much on her childhood?

Hilary Swank: Yeah, and I think childhood makes up a lot of who we are and how we carry ourselves in the world. What her parents were like and the gifts they gave her and her
sister – her father encourage her to write. She was a prolific writer. She was writing poetry at the age of five. But, then her father became an alcoholic and really affected her.

SheKnows: How do you think Amelia Earhart’s story ends? 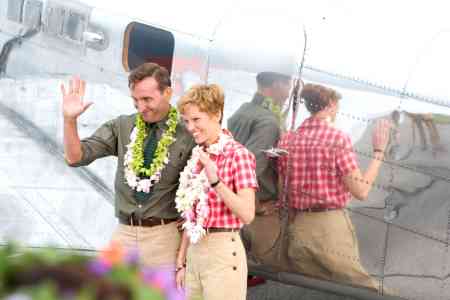 Hilary Swank: I believe she ran out of fuel. I know a lot of different ideas of what happened. Was she kidnapped by the Japanese (laughs)? Stranded on an island, you know?
It’s funny. Some people are saying that that is not how we should have ended the movie. I appreciate that there can be a lot of different ways. Maybe if we’re successful, we’ll
pretend she did land for the sequel.

SheKnows: She was one who looked past people who told her to cool her ambitions. You probably have had a few people also who have shot disparaging words.

Hilary Swank: Oh, absolutely. I had one teacher who told me when am I going to give up my hobby. Look, everyone’s going to have an opinion and when you’re pursuing your
dream and you have people, I had someone tell me I was too half-hour when I was trying to get into drama. There are types of opinions. But, some of them — neither of those — can be constructive.
I think you have to learn how to decipher what’s constructive and what you can take in to incorporate into being a better actor or help you be successful. As actors, we wear our hearts on our
sleeves. It’s easy to have that bad stuff that’s thrown at you…be upsetting.

read on for more movies