Amelia is Hilary Swank, Hilary Swank is Amelia — and the two could not be more intertwined in Mira Nair’s biopic of a cultural female icon. “Soaring” seems cliche in describing a film that chronicles the life of America’s most famous female pilot, but Amelia does fly high, even if it doesn’t know quite where to land.

Related story Hilary Swank Secretly Got Married, & You Bet Mariska Hargitay Was by Her Side

To tell the story of Amelia Earhart on a movie screen must have been a dicey proposition. Amelia is based on the novels East to the Dawn by Susan Butler and The Sound of
Wings by Mary S Lovelland and captures the essence of a life that inspired millions — and it’s a tale that has rarely been seen cinematically. 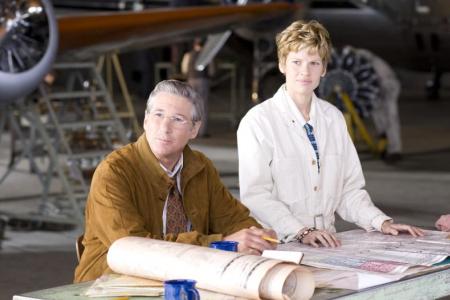 Swank has the Earhart story wrapped around her two-time Oscar-winning fingers. The challenge is telling a story for which audiences already
know the ending.

Nair tackles that story speed bump by presenting Amelia Earhart’s fateful final journey at the film’s opening moments. Swank’s Amelia is piloting her plane around the globe on her final
aviation effort. Through flashbacks that are truly the essence of the film, Amelia paints a picture of a woman who went beyond inspiring to become a historical pillar of female
advancement.

Bookended by her 1937 fateful flight, Amelia traverses the airwoman’s Kansas beginnings to the sacrifices Earhart made to become the most famous woman in 1930s America. 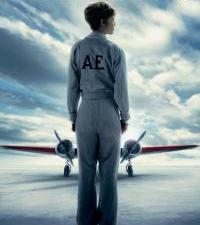 Swank is blindingly brilliant as the
iconic airwoman — so brilliant that you spend hours recreating the story as your imagination, history and Hollywood incarnation blur.

Nair, whose recent credits include Reese Witherspoon’s Vanity Fair and the Bollywood classic Monsoon Wedding, tackles a true story while refraining from spinning a biographical
web. Amelia, her film, puts the best of the Amelia Earhart story on screen in a tapestry of tribute. But does it work?

Therein, unfortunately, lies the problem with Amelia. A biopic should answer the big life questions. Amelia does that, yet shies away from spotlighting Earhart’s immense
achievements.

Earhart’s landing in Europe after her first record-setting transatlantic flight with what felt like little fanfare robs the audience of the cheering pleasure many seek in film. The first words upon
her historic landing are priceless:

The approval swells but not before the audience is ripped from the immediate thrill of Earhart’s accomplishment and sent to her fateful flight. Nair chose to frame the Earhart biography with
a narration-led journey across the final flight late in the editing process. 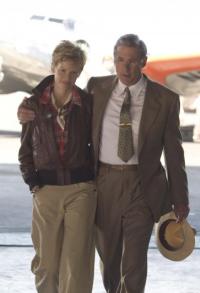 The final third of the film
is harrowing. Knowing how this story ends could have created issues for a filmmaker. Nair shot her conclusion directly from the final minutes of Amelia Earhart’s real broadcasts, thus achieving the
sentimentality and thrill she sought.

The presence of the ocean and the sky are impossible to escape as Earhart finds solace in the skies. If this sentiment is what you seek in an inspiring film for women of all generations, then
Amelia achieves that in droves. If instead you’re looking for a dramatic solution of the Earhart mystery, you will be disappointed.

Tossing that curiosity aside, Amelia tells Earhart’s story in a way that builds the audience’s passion for the heroine. And in the gifted realm of Swank’s thespian talent,
Earhart lives and breathes.

For that reason alone, Amelia is worth witnessing on the big screen. For its historical significance — and because a film showcasing one woman’s remarkable contribution to history may
help bring the thousands of other such women’s tales out into the light of day — Amelia is awesome.