A mistrial has been declared in the case against two Bahamians accused of attempting to extort millions from John Travolta. 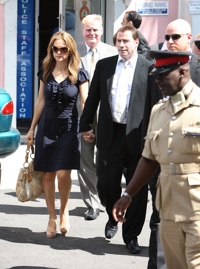 The judge in the case was forced to declare a mistrial when
juror misconduct became obvious. What happened? A local politician made an announcement at a rally that one of the accused, former Bahamian Senator Pleasant Bridgewater, had been found not guilty.

Problem? The jurors were still deliberating. In fact, they had been in the jury room for eight hours and had sent a message to the judge stating they were having a hard time reaching a verdict.

“About two hours ago, there was an announcement at a particular political party,” Judge Anita Allen said to cowed jury. “It leaves the impression that there may have been a communication in the
jury room. I am going to discharge you from returning your verdict.”

“We would have liked to have had a verdict so there would be closure in this case, but we prefer to have a new trial,” said Travolta’s lawyer Michael Ossi. “We believe the evidence was very strong
and convincing. The jury was deliberating for about eight hours. … If, in fact, Tarino Lightbourn or Pleasant Bridgewater were found not guilty, a verdict would have been read hours before this
announcement.”

Rep Samantha Mast spoke for John Travolta and wife Kelly Preston about the judge’s decision. “We are disappointed to hear about the alleged juror misconduct since we know that the Bahamian
government, the court, the other jurors and John Travolta as the victim want to have this matter adjudicated through the judicial system.”

“Mr Travolta has and will continue to cooperate with the Bahamian authorities in the prosecution of the defendants for extortion.”

The Bahamian pair was being tried on extortion charges after attempting to blackmail Travolta for millions after the death of his teen son
Jett, who suffered from autism and a seizure disorder. Retrial plans have not yet been released.