Could Mia Michaels cancer reports prove to be all speculation? 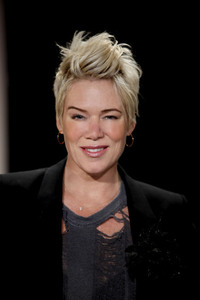 Michaels, whose been nominated for two Emmys
for her work on So You Think You Can Dance and taken one home, handed in her resignation and
informed fans she was exiting the show about a week ago.

“It’s been an amazing five years on SYTYCD,” she wrote on her Facebook page. “I thank them for all the great memories and movement I have been able to create for the world.
Today was my official resignation of the U.S. show and look forward to what’s ahead for me.”

Since the announcement, we’ve even heard from Nigel Lithgow. Always the producer, he was sure to applaud Mia — and the show itself! — while leaving things open for her return.

“We are thrilled to have given a talent such as Mia Michaels a platform to create Emmy Award-winning choreography,” he said in a statement. “During the auditions this season she has helped
choose the best, most diverse top 20 we have ever had. She knows that she is always welcome to return later this season or next. She’s chosen to move on to new challenges and we will continue
to support her and wish her all the best.”

Now, with rumors of a bald photos circulating on the net, folks are crying cancer. Call it wishful thinking, but SheKnows doesn’t see how this rumor fits.

True, if certain female celebs shaved their heads, we’d be more likely to follow the flock, but Mia Michaels shaving her head just isn’t news. In fact, if you look at our interview with her from
last year, you’ll see the photo we ran with it is nearly a buzz cut.

SheKnows is also calling attention to the words used. Michaels announcement claims that she’s looking forward to the future, and per Nigel’s statement, one doesn’t “choose to move onto” the
challenge of cancer.

One chooses to move on to a new challenge, because she thinks she can do better or more with it than the current challenge – and that sounds like the cocky and talented Mia Michael’s we know!

For five years, she has been a rocky personality. Her choreography is known to be wild, weird and moving, not to mention Emmy-winning, but she’s never tried to come off as “nice” or “easy.”

She has a unique ability to help her dancers tap into their emotion – some might say by breaking them and beating them into submission.

SheKnows hopes this cancer talk is just an example of folks jumping to the wrong conclusion, but if it’s true… she’ll have a new target to beat into submission, and SheKnows wishes her all
the luck and strength she’ll need!

Cat Deeley dishes So You THink You Can Dance