Michael Jackson fans across the globe — the countdown is on. This is It arrives in theaters in a matter of days with its October 28 premiere. 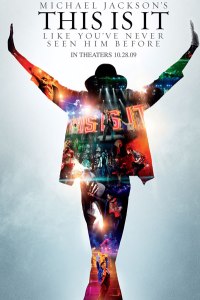 Michael Jackson will never hit the stage again, but fans get one more dance when This is It debuts!

The concert-movie-documentary was compiled using taped rehearsal and behind the scenes footage from Michael Jackson’s aborted concert extravaganza, This is It!, which was to include 50 shows in London.

The highly anticipated multimillion-dollar effort would have marked Jackson’s return to the stage and was being touted as both his comeback and his final curtain call. And he, and many around him,
felt it provided a priceless opportunity for Jackson to truly reclaim his throne as pop music’s most talked about performer.

Whether it was indeed his final dance, his return to the stage promised a night of glitz, glam and Michael magic — not to mention sparkling Christian Audigier costumes!

All 50 concerts sold out almost immediately and since his death, his albums have been flying off the proverbial shelves, especially his latest singles album, Number Ones.

“We took more orders for Jackson CDs and MP3s in the first 24 hours after his death than we did in the previous 11 years of the Amazon music store,” marveled Amazon spokesman Andrew Herdener.

With that in mind, it’s no surprise the film is already breaking international records with pre-sales and is expected to break records here it The States, where it’s already boasting sold out
shows.

While we know where the footage came from — and that Sony paid $60 million for it! — most don’t know what to expect from Michael’s final stand next week.

Jackson clearly had that unbelievable talent in him and director Danny Ortega, who had a hand in the concert and now the movie, insists MJ still had it up until the very end. Any sign of frailty
disappeared as soon as the music started playing.

Now that it’s a film, Sony is promising chills. “It’s a movie about rehearsing for a concert that never happened,” co-chair of Sony Pictures Amy Pascal previews. “It’s heartbreaking and inspiring
at the same time. It gives you chills.”

While some lucky fans nabbed tickets to the October 27 screening at LA LIVE, the film hits theaters and IMAX October 28 for a two-week run.