Since it hit the cybersphere, folks aren’t sure what to make of the lyrics or cover art of Rihanna’s long-awaited new single. 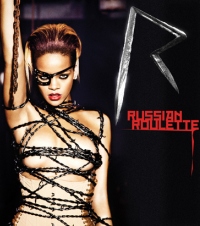 By now, you’ve likely seen this photo of Rihanna entangled in S&M-esque barbed wire, looking tough as can be in an eye patch and flesh-hued corset for her single Russian Roulette.

The hubbub that’s ensued questions the message Ri Ri is sending, and whether it’s a good one. SheKnows thinks it’s hot, and yes, it definitely bothers, but we suspect that’s the point.

The single it promotes, Russian Roulette, is a dark, beautiful piece about playing that risky game, and we can’t help but see the parallels to living with an abusive man — someone who charms you into calm, even though you’re playing a life-and-death game.

Rihanna seems to be trying to make sense of what she’s been through, and SheKnows isn’t here to censor her.

As for concerns about the message young girls will take away from the racy image… how ’bout we deal with the strippers grinding in rap videos before shooting down a young woman who is making a controversial statement?

Rihanna’s last album went for the naughty (as per the title, Good Girl Gone Bad), but way before Russian Roulette hit the ‘Net, her guys were already talking up the energy of her new hush-hush album, Rated R.

Justin Timberlake, who worked on a few songs that may end up on the album (and has therefore been rumored to be dating Ri Ri!), adds that the young star is growing up, and this album will reflect that.

“She has things she can say, so that’s what we tried to do — to craft things that are that of a young woman,” he says of writing for her. “I’ve heard some of the stuff on the record, and it’s awesome.”

Whatever message we take from her new single or album, Ne-Yo adds that we shouldn’t expect her to back down. “The best and safest way I can say this is that Rihanna has some stuff to say, and she’s going to say it — and she ain’t going to make no apologies for it,” he warned.

As SheKnows sees it, she has nothing to apologize for.

As a side note, though, Chris Brown clearly does. He just dropped his single Crawl this morning…. SheKnows listened, but we’re not sure we cared. Did you?