Nicole Richie shares her new baby with the world on this week’s cover of People. 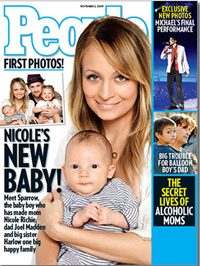 Nicole and the adorable 6-week-old baby boy appear happy and smiling on the cover, which also features an inset photo of the whole family — including daughter
Harlow and dad Joel Madden.

Nicole, who apparently couldn’t be bothered to wash her hair before the photo shoot, is reveling in her role as a mother of two. “I
couldn’t be happier,” she told People. “The only thing you want is for your kids to be healthy and happy, and they are. I’m right where I belong.”

How does little Harlow feel about the new addition? “I’m glad I had a girl before I had a boy,” Nicole said. “She just loves him so much.” Added Joel, “She’s very gentle with him.”

Nicole and Joel have been together since December 2006 and had daughter Harlow in January 2008. They have not publicly announced any plans to marry.

Balloon boy update: charges to be filed against parents