We’re sure the First Lady will be talking more than pop culture when she visits The Jay Leno Show October 23. She’ll appear via satellite from Washington, DC and will respond to ten
rapid-fire questions in a segment with the host called 10@10. 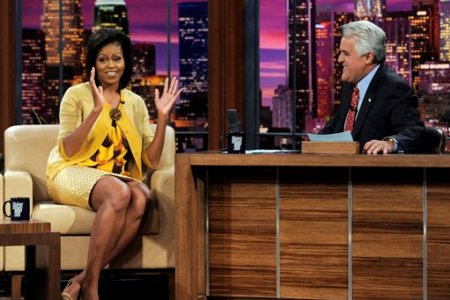 Incidentally, this is not Mrs Obama’s first trip to Jay’s couch. Her husband, President Obama, has been a virtual regular visitor with Leno over the years.

Although Colin Firth is the guest for this Friday, since Michelle will be on via satellite, the actor won’t get to meet the First Lady. She will join the ranks of other celebs who joined in
the fun on Leno’s ten rapid-fire segment like Justin Timberlake, Senator John McCain and LeBron James.

In other Michelle Obama news, she’s been quite busy as part of her gratitude tour.

On the morning of October 21, First Lady Obama was driven to the Veterans Affairs Department to continue the tour of federal
operations. She met with federal workers at cabinet level departments. She mentioned that one reason why she does that is because federal employees often feel under-appreciated.

“You often get a lot of the blame but sometimes none of the thanks. And my simple job is to say thank you because the job that you do is a big one.”

Mrs Obama also spoke to a crowd of 125 people at a conference center and prior to that she met with 300 Virginia workers in another location.

Read on for more Obama news

Michelle Obama on life in the White House